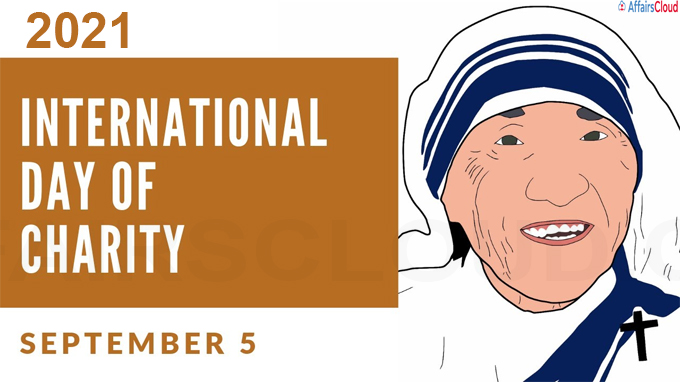 The United Nations (UN)’s International Day of Charity is annually observed across the globe on 5th September to recognise the role of charity in attenuating humanitarian crises and human suffering across the globe.

Objective of the Day:

To sensitize and mobilize people, Non-Governmental Organisations(NGOs) and other stakeholders across the globe to help others through volunteer and philanthropic activities.

i.The International Day of Charity was first celebrated by the Hungarian civil society with the support of government of Hungary.

ii.The United Nations General Assembly (UNGA) adopted the resolution A/RES/67/105 on 17th December 2012 and proclaimed the 5th September of every year as the International Day of Charity.

ii.She gained Indian Citizenship in 1948 and founded the Order of Missionaries of Charity in Kolkata (Calcutta) in 1950.

iii.In 1979, She was honoured with the Nobel Peace Prize for her work for bringing help to suffering humanity.

v.She was honoured with Padma Shri in 1962 for social work.

Importance of Charity in SDGs:

i.Charity contributes to the creation of inclusive and more resilient societies and alleviates the effects of humanitarian crises, supplement public services in health care, education, housing and child protection.

ii.2030 Agenda on Sustainable Development, adopted in 2015, recognises the eradication of poverty in all forms.

iii.The 17 Sustainable Development Goals (SDGs) set forth in the 2030 Agenda provides the framework required for philanthropic institutions to enable the people to contribute to the development of the world.