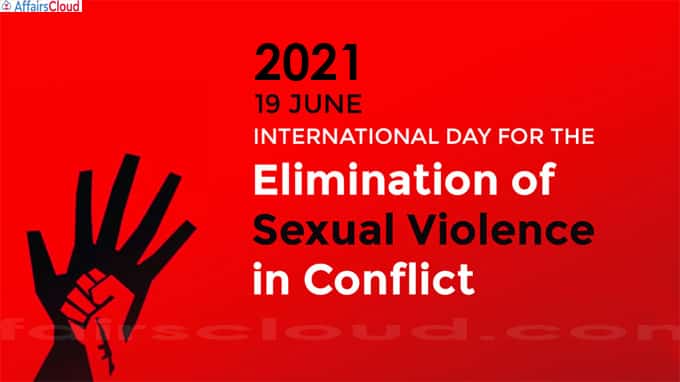 The United Nations (UN)’s International Day for the Elimination of Sexual Violence in Conflict is annually observed across the globe on 19th June to create awareness about the needs to end the conflict-related sexual violence, to honour the victims and survivors of sexual violence around the world.

The day also pays tribute to the people who have contributed their lives to eradicate conflict-related sexual violence.

2021 marks the 7th observance of the International Day for the Elimination of Sexual Violence in Conflict.

The United Nations General Assembly(UNGA) adopted the resolution A/RES/69/293 on 19 June 2015 and proclaimed the 19th June of every year as the International Day for the Elimination of Sexual Violence in Conflict.

June 19 commemorates the adoption of the Security Council resolution 1820 (2008) which condemned sexual violence as a tactic of war and an obstacle to peace.

The virtual event of the 7th official observance is co-hosted by the Office of the Special Representative of the Secretary-General(SRSG) on Sexual Violence in Conflict, the Office of the SRSG on Children and Armed Conflict and the Permanent Mission of Argentina to the United Nations.

ii.This also includes trafficking committed during conflict for the purpose of sexual violence or exploitation.