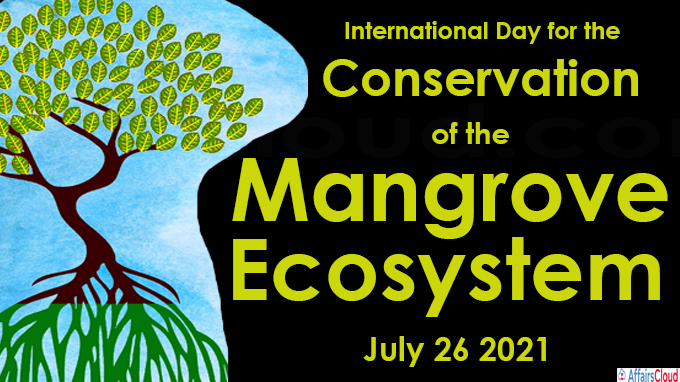 The International Day for the Conservation of the Mangrove Ecosystem is annually observed across the globe on 26th July. the day aims to create awareness on the importance of the mangroves in preserving ecosystems and to promote solutions for the sustainable management, conservation and use of mangrove ecosystems.

The day is also known as World Mangrove Day.

i.The 38th Session of the General Conference of the UNESCO held on 6th November 2015 in Paris, France adopted the resolution 38C/66 and declared the 26th July of every year as the International Day of the Conservation of the Mangrove Ecosystem.

ii.The day was established as a response to the request of Ecuador.

iii.The first International Day of the Conservation of the Mangrove Ecosystem was held on 26th July 2016.

The day marks the death anniversary of the Greenpeace activist Hayhow Daniel Nanoto who died on 26th July 1998 during a protest to re-establish the mangrove wetlands in Muisne, Ecuador.

i.Mangrove forests, a unique, special and vulnerable ecosystem, are found along the coastlines in tropical and subtropical regions.

ii.Mangroves are the only trees that grow in saltwater.

iii.The mangrove forests represent less than 1% of all tropical forests and less than 0.4% of the total forest regions.

iii.They provide a natural habitat to the range of fish, shellfish, migratory birds and insects.

They take 5 times more carbon from the atmosphere than the forests on land.