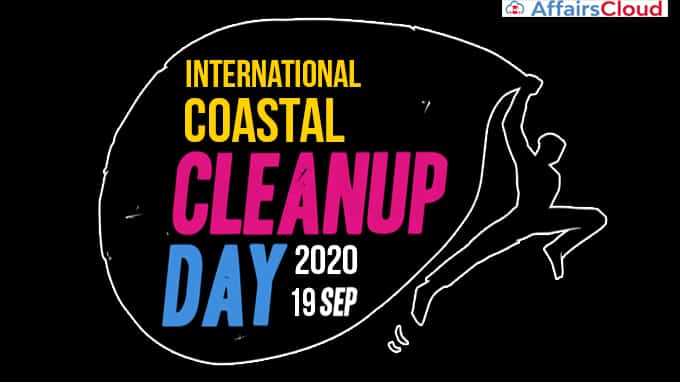 The International Coastal Clean-Up Day has been celebrated across 100 countries since 1986 on September 19. On this day, volunteers clean beaches, waterways and oceans to protect them from impacts of plastic and trash. The movement was started by Linda Maraniss & Kathy O’Hara of the United States.

i.Linda met O’Harra while working for Ocean Conservancy, when O’Hara completed the report “Plastics in the Ocean: More Than a Litter Problem”.

ii.They conducted their first cleanup by reaching out to ocean-lovers and organized a Cleanup for Ocean Conservancy.

Initiatives by Government of India:

On the eve of International Coastal Clean-Up Day 2020 (i.e on 18th September, 2020), the Ministry of Environment, Forest and Climate Change (MoEFCC) organized a virtual event and launched initiatives for Coastal Clean-Up.

i.During the virtual event, MoEFCC announced that for the first time eight beaches of India have been recommended for the prestigious International eco-label, the Blue Flag certification.

ii.The eight beaches are Shivrajpur in Gujarat, Ghoghla in Daman & Diu, Kasargod and Padubidri beach in Karnataka, Kappad in Kerala, Rushikonda in Andhra Pradesh, Golden beach of Odisha and Radhanagar beach in Andaman and Nicobar.

iii.The recommendations have been done by an Independent National Jury which consists of eminent environmentalists and scientists.

ii.In order to qualify for the prestigious label, the beaches have to meet a series of stringent environmental, educational, safety-related and access-related criteria.

India Launches its own eco-label BEAMS:

i.During the virtual event, MoEFCC launched India’s own eco-label BEAMS (Beach Environment & Aesthetics Management Services) with an aim to reduce pollution and to maintain high standards of cleanliness, safety for beachgoers in accordance with coastal environment and regulations.

The Flag Hoisting Program (#IAMSAVINGMYBEACH) was conducted simultaneously at these 8 beaches virtually from MOEFCC and physically at the beach by their respective Member of Legislative Assembly (MLA) or Chairman of Beach Management Committees (BMCs).

i.On August 7, 2020 UNESCO recognised Venkatraipur and Noliasahi, villages of Odisha as ‘Tsunami Ready’ for their overall preparedness to face the tsunami. Odisha became the first state in India and India became the 1st Country in the Indian Ocean region to achieve the honour.

About Foundation for Environment Education: