The International Astronomy Day is celebrated twice a year (bi-annual), once in the spring(in 2020- May 2) & another in autumn(in 2020- September 26). On this day, professional and amateur astronomers all over the world share their great field with the Universe to the public, through observing sessions, displays and information booths in malls, science centres and planetariums to increase public awareness about astronomy and the universe. 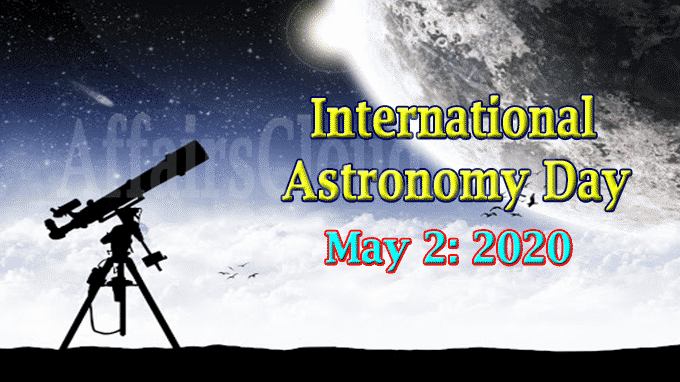 i.Doug Berger, former President of the Astronomical Association of Northern California, founded this event in 1973, it was originally celebrated by setting up telescopes in urban locations in order to make space more accessible to everyone so as to increase interest in the field of astronomy and give the general public access to more ways to learn about it.

ii.Currently, the day has included the entire world and many organizations and groups, it was also amended in 2006 to include a second day of celebration in the fall.

ii.United Nations Educational, Scientific and Cultural Organization(UNESCO) endorsed the IYA and the United Nations General Assembly  proclaimed the year 2009 as the day on 20 December 2007

iii.The IYA 2009 celebrates the 400th anniversary of Galileo’s introduction of the telescope to astronomy and the publication of Johannes Kepler’s Astronomia nova in the 17th Century, to gear up this anniversary nearly 100 countries have already established “national nodes” to coordinate planning among amateurs, professionals, educators, planetarians, and others interested in promoting astronomy.

iv.The UN’s declaration is a 5 year effort by the government of Italy, the International Astronomical Union(IAU), and the United Nations Educational, Scientific and Cultural Organization(UNESCO).

Aim of the week– to celebrate the close approach of Mars, and to give members of the public the chance to see the red planet in closeup through a telescope.