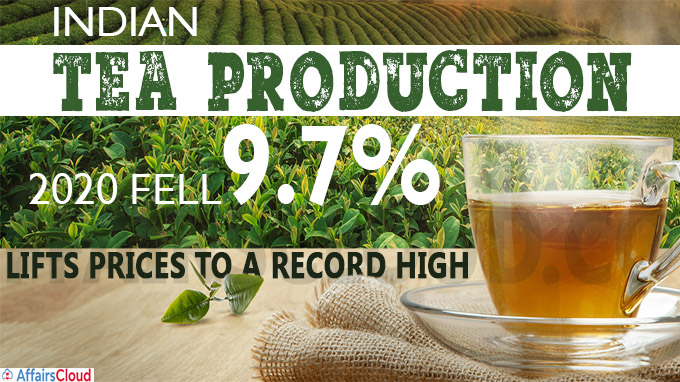 The production of tea in India dropped by 9.7% in 2020 due to the flood and movement restrictions due to the COVID-19 pandemic.  The reduction in the tea production increased the price of tea by 31% from the price of 2019, to a record price of Rs.184.69 per Kg.

This increase in price has supported the Indian tea industry which was under severe stress due to the rising production cost.

Production of tea in India:

ii.The production dropped since the flood has damaged the tea gardens in Assam, which produces around 50% of India’s tea production and the output also reduced due to the lack of labour movement due to the lockdown imposed due to COVID-19.

iii.The north-eastern parts of the country are expected to produce a higher output in 2021 due to high rainfall in that region.

On May 15, 2020 According to Department of Agriculture, Cooperation and Farmers Welfare’s 3rd Advance Estimates of production of major crops for 2019-20, the total foodgrain production in the country is estimated to achieve a record of all-time high 295.67 million tonnes in 2019-20 for the 4th consecutive year since 2016-17 crop year (July-June).