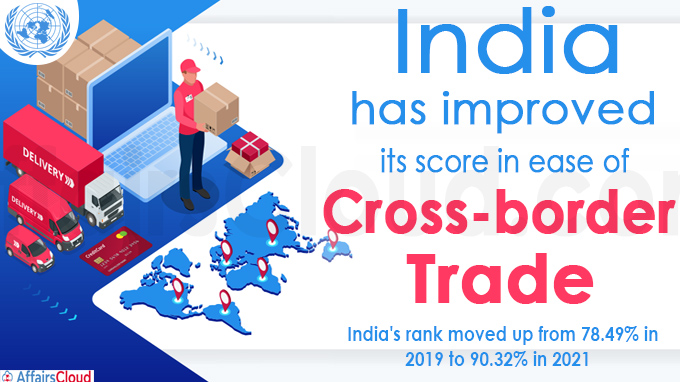 India’s efforts in streamlining the assessment and clearance of shipments to ease and boost cross-border trade have fetched fruitful results as India’s Trade facilitation score has increased to 90.32% from 78.49% in 2019 in the United Nations (UN) 4th Global Survey on Digital and Sustainable Trade Facilitation 2021.

It tracked 143 economies on 58 parameters related to the WTO’s Trade Facilitation Agreement (TFA), Framework Agreement on Facilitation of Cross-Border Paperless Trade in Asia and the Pacific (CPTA), among others over a two-year period.

ii.India was among the best-performing countries in South and South West Asia, and the Asia Pacific region.

iii.India’s overall score was also higher than many Organization for Economic Cooperation and Development (OECD) countries, and the average European Union (EU).

How is this survey helpful?

It helps the countries to monitor their progress in the implementation of measures for sustainable and digital trade facilitation. It also helps in identifying areas where more efforts are needed to address policy, legal, regulatory and technical obstacles.

About Global Survey on Digital and Sustainable Trade Facilitation:

In the recently released World Competitiveness Index 2021 released by the Institute for Management Development’s (IMD) World Competitiveness Center, India retained its 43rd rank out of 64 nations (for the 3rd consecutive year). Switzerland topped the Index followed by Sweden in the 2nd spot & Denmark in the 3rd spot.