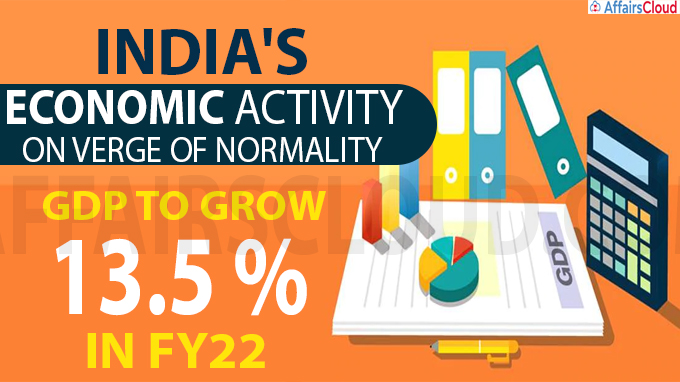 In accordance with Nomura, India’s Gross Domestic Product (GDP) will grow at 13.5% in FY22 as Nomura India Business Resumption Index (NIBRI) increased to 98.1 for the week ending February 14, 2021 from 95.9% in the preceding week.

On the other hand, India Ratings & Research (Ind-Ra) projected aggregate fiscal deficit of States for FY22 at 4.3% of GDP compared to 4.6 %(Revised) in FY21. In this regard, the agency has revised the outlook on State finances for FY22 from stable to negative.

Key Points as per Ind-Ra Projections:

–The aggregate revenue receipt of the States to grow at 8.4% in FY22.

–The revenue deficit of States is estimated at 1.5% of GDP in FY22

–The Union government financed Rs 5.50-lakh crore to States in FY21 as against the Budget estimate (BE) of Rs 8.03-lakh crore amid economic disruption caused by COVID-19.

The 15th Finance Commission (FC) has submitted its report for the period FY22 to FY26. As per its recommendations, the government in its FY22 Budget has committed to retain the vertical share of States in central taxes at 41%.

ii.In accordance with the report by rating agency ICRA (formerly Investment Information and Credit Rating Agency of India Limited), India’s real GDP (Gross Domestic Product) will expand by 10.1% in FY2022 with multi-speed recovery. However in absolute terms India’s GDP will “mildly” surpass the levels of FY20.