A group of seven Indian students has bagged two awards at a robotics Olympiad organised by ‘FIRST Global’ in Washing D.C., US. 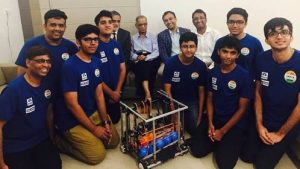 There was a proud moment for all-girl team from Afghanistan as they won the Rajaa Cherkaoui El Moursli award for courageous achievement.

FIRST Global is a not-for-profit charity that organizes a yearly international robotics challenge to ignite a passion for Science, Technology, Engineering, and Mathematics (STEM) among more than two billion youths across the world.