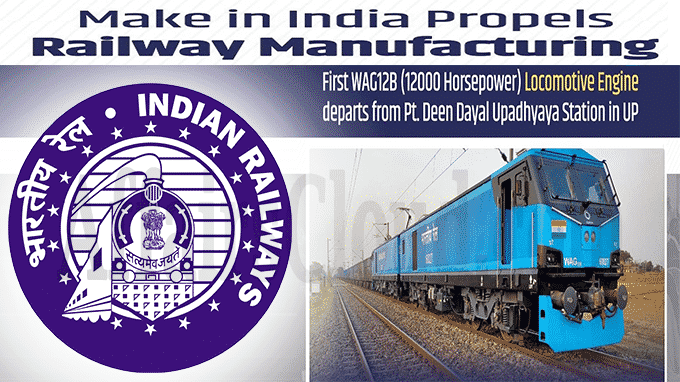 On May 18, 2020 Indian Railways(IR) operationalised its 1st 12,000 horsepower(hp) electric made in India Locomotive(loco), WAG12(with Number 60027)  from Deen Dayal Upadhyaya Station(Mughalsarai Junction), Uttar Pradesh to Shivpur. It is manufactured by Madhepura Electric Locomotive Pvt. Ltd.(MELPL) Factory, Bihar which is a joint venture between French giant Alstom(74% share) & IR(26% share). India became the 6th country to produce high hp loco indigenously & is the 1st time it operationalised high hp on a broad gauge track in the world.

ii.Has twin Bo-Bo design with 22.5 T (Tonnes) axle load which is upgradable to 25 T with design speed of 120 kmph. It can be tracked through  Global Positioning System(GPS) for its strategic use through embedded software and Antennae being lifted through the servers on the ground through microwave links.

iii.Has capability to work on railway tracks with conventional Overhead Equipment(OHE) lines & on Dedicated Freight corridors with high rise OHE lines. It is equipped with air-conditioned driver cabs on either side & will help to decongest the saturated tracks by improving average speed of freight trains.

iv.Has capacity to manufacture 120 locomotives per year. It will create more than 10,000 direct and indirect jobs in the country. More than Rs 2000 Crores has already been invested in the project by the company.

v.Entry of the loco in IR fleet will increase the speed of freight trains & allow faster, safer and heavier freight trains to move across the country, thus reducing congestion in traffic & will also lead  to save energy consumption through regenerative braking

vi.The design was completed for the whole locomotive in a record time of four to six months

It is the largest integrated Green Field facility built to the highest standards of quality and safety with production capacity of 120 locos and spread across a massive 250 acres.

ii.The project started in 2018 and the Prime Minister Narendra Modi inaugurated the project on 10th April’ 2018. The prototype locomotive was delivered in March 2018.

iii.In 2015, the national transporter also signed an agreement with American Conglomerate General Electric for supplying 1000 diesel locomotives over a period of 11 years.

iv.Alstom in 2015 bagged a Rs. 25,000 crore order for supplying 800 high-power electric locomotives, one of the largest instances of public-private partnership in the country.

About IR:
In total there are 18 zones, each as a headquarters.
Chairman Railway Board– V. K. Yadav
Union Railway Minister– Piyush Goyal, Constituency- Rajya Sabha (Maharashtra)