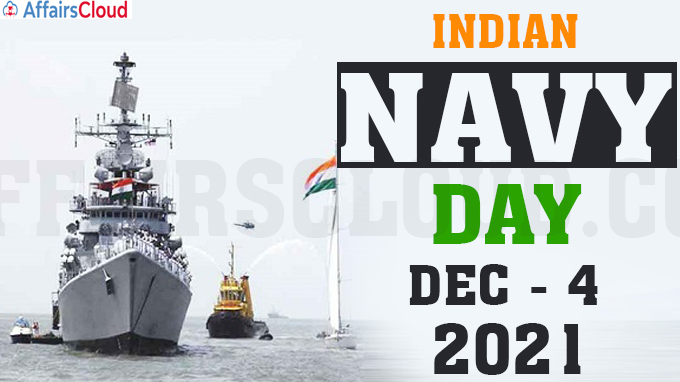 The Indian Navy Day is annually observed across India on 4th December to commemorate the victory of India Navy’s Operation Trident, launched during the 1971 Indo-Pak war and to pay homage to the martyrs who lost their lives in the line of duty.

The theme of 2021 Indian Navy Day is ‘Swarnim Vijay Varsh’, which highlights the 50th anniversary of the victory of the Indian armed forces in the 1971 Indo-Pak War.

i.The Indian Navy Week 2021 will be observed from 1st to 7th December 2021 during which various activities and events will be organised.

ii.The Southern Naval Command (SNC) of the Indian Navy has announced several activities as a part of the Navy Week 2021. The activities include a Navy band symphonic concert at Sagarika Auditorium, Naval Base, Kochi, Kerala.

ii.The operation was conducted on the night 4-5 December 1971 and successfully sank Pakistan’s minesweeper, a destroyer and a cargo vessel carrying ammunition and destroyed the Karachi harbour fuel fields.

iv.Operation Trident witnessed the first use of anti-Ship missiles in combat in the region.

i.Under British Rule, the Royal Indian Navy celebrated the first Navy Day on 21st October 1944 to create awareness about the Navy among the people.

ii.Later, Navy Day was celebrated on 15th December and the week on which December 15th falls was observed as Navy Week.

iii.Since 1972, Navy day has been observed on December 4th and the Navy week is observed from 1st to 7th December.