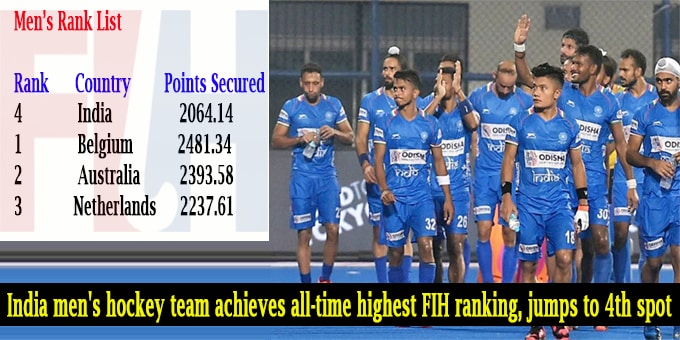 i.Indian Men’s team’s excellent performance in the 1st 3 rounds of the 2nd edition of FIH Hockey Pro League paved the way for them to move from 5th spot to 4th spot. This is the highest ranking position since the formation of FIH rankings in 2003.

Model to calculate FIH World Ranking
After the approval from the FIH Executive Board, a new World Ranking model took effect from January 1, 2020. Previously the tournament based ranking system was adopted,at present a match based model where opposing teams exchange points.The number of points exchanged depends on the result of the match, the relative ranking of the teams and the importance of the match.

About FIH World Ranking
It was introduced in October 2003.This ranking system is for men’s & women’s national teams in field hockey. The teams of the member nations of FIH, field hockey’s world governing body are ranked based on their game result. It determines the quotes for tournaments such as the Olympic Games and the World Cup.