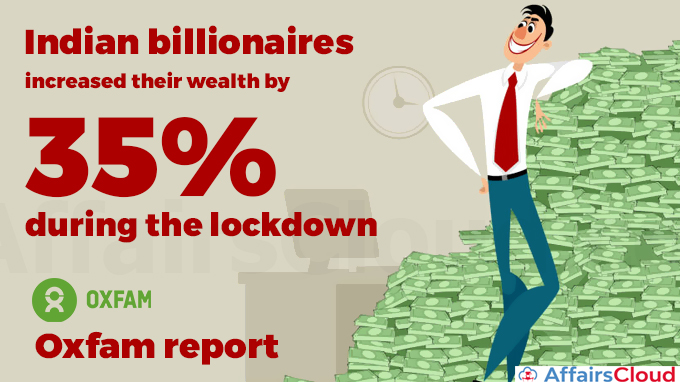 In accordance with the Indian supplement of Oxfam report “The Inequality Virus”, the top 100 Indian  billionaires increased their wealth by 35% during the lockdown to Rs 12,97,822 crore.

–As per the report, an unskilled worker will take 10,000 years to make what Mukesh Ambani made in an hour during the pandemic.

–The survey for the report covered 295 economists from 79 countries out of which 87% expect an major increase in income inequality in their nation.

–If India’s top 11 billionaires are taxed at just 1% on the increase in their wealth during the pandemic, it will increase the allocation of Jan Aushadhi Scheme by 140 times,.

i.The Food and Agriculture Organization (FAO) has published a flagship report titled “The State of Food and Agriculture(SOFA) 2020′ with theme “Overcoming Water Challenges in Agriculture”. The report states that around 1.2 billion people across the globe are under high levels of water stress, which means that one out of every 6 people in the world are facing a severe water stress or scarcity in agriculture with more than 15% of the rural population at risk.

ii.In accordance with the “World Malaria Report 2020” released by World Health Organisation (WHO), India recorded the largest reduction of malaria cases in South-East Asia from 20 million in 2000 to about 5.6 million in 2019.