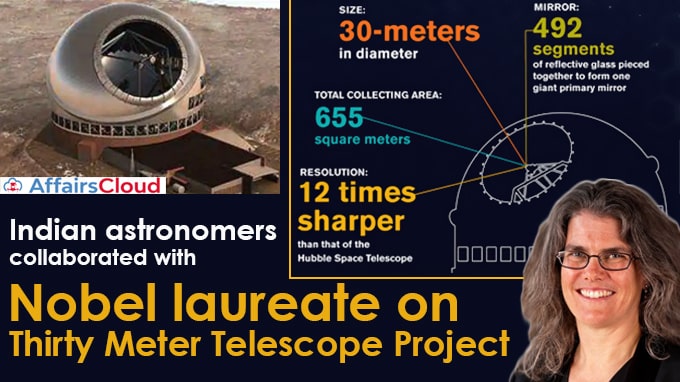 Indian Astronomers had worked closely with 2020 Physics Nobel Laureate Professor Andrea Ghez for designing the back-end instruments and possible science prospects of the Thirty Meter Telescope (TMT) project which is being installed at Maunakea in Hawaii. The project will revolutionize the understanding of the universe and mysteries surrounding it.

i.The TMT project is an international partnership project between CalTech, Universities of California, Canada, Japan, China, and India;through the Department of Science and Technology (DST) and Department of Atomic Energy (DAE).

ii.Indian Astronomers like Dr. Annapurni Subramanium, Director of the Indian Institute of Astrophysics (IIA) and Dr. Shashi Bhushan Pandey, a scientist at Aryabhatta Research Institute of Observational Sciences (ARIES) along with many others collaborated with Professor Andrea Ghez in the ongoing Research and Developmental activities of TMT Project.

iii.The scientific prospects and simulations by a first generation instrument for TMT called the Infrared Imaging Spectrograph (IRIS) were described in one of the Society of Photo-Optical Instrumentation Engineers (SPIE) proceedings in 2016.

iv.It revealed the capabilities of IRIS/TMT to continue front-line scientific research to understand the nature of supermassive compact objects and new aspects to discover “unknown-unknowns”.

ii.India has committed $200 Million, which is about tenth of proposed cost. The telescope needs 492 precisely polished mirrors and India has contributed 83 of them.

i.The Telescope is designed for UltraViolet to mid infrared observations.

ii.It has 30 metres prime mirror diameter and is three times as wide as the largest existing visible light telescope in the world so it is touted to be one of the largest Telescopes of the world.

iii.The Telescope has 655 square Meters of total collecting area. It has resolution of 12 times sharper than that of Hubble Space Telescope.

i.On August 24, 2020, in accordance with the Inter-University Centre for Astronomy and Astrophysics (IUCAA) in Pune, Maharashtra, India’s first multi-wavelength satellite observatory, ASTROSAT, has detected an extreme ultraviolet (UV) light from a galaxy called “AUDFs01” which is 9.3 billion light-years away from Earth.

ii.Researchers have given Dwarf Planet Ceres the status of an “Ocean World”.

About Ministry of Science & Technology: