The competition was structured to remember the anniversary of the first UN General Assembly resolution adopted in 1946 establishing a Commission to deal with problems related to the discovery of atomic energy.

Title of the Competition: ‘Cutting Barriers through Peace’ 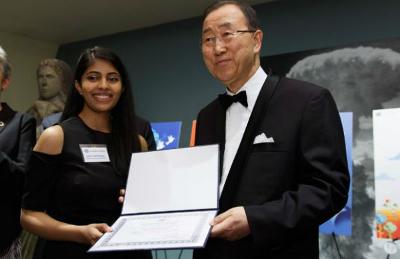 38-year-old artist from Peru for his ‘Spinning Peace’

15-year-old, named her poster as ‘Peace in our Hands’

Nine honorable mentions were chosen from among more than 4,100 entries representing 123 countries including ‘Break free’ by the Chennai girl shows doves flying out of a bird cage at the top of a nuclear weapon

The youngest artist in the competition was 10 years old.

Aims of the competition: