The Indian Army (IA) is to conduct exercise codenamed “Sindhu Sudarshan” for the year 2019 in the deserts of Rajasthan from November 29 to December 4, 2019. The aim of this exercise is to evaluate the capability of the defence services in an integrated air-land battle. 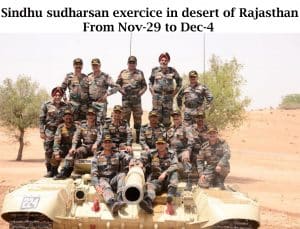 Key points
i.The exercise will showcase the IAs implementation of the integrated launch of Strike Corps with more than 40,000 troops taking part in the exercise. These troops, along the western front will be using proactive strategy using the Integrated Battle Groups(IBGs) which are the new formation in the army’s warfare.
ii.In the Sindhu Sudarshan exercise, operational efficiency of the Strike Corps fighting in the desert terrain will be assessed and the Indian Air Force(IAF) will provide support in terms of destruction of targets and airlifting troops.
iii. The exercise which would showcase the synergy between the army and the air force will be reviewed by lieutenant general Satinder Kumar Saini.