On August 16, 2019, The Indian Army team participated for the 1st time& has emerged as the winner among 8 teams in five stages of the 5th  edition of ‘International Army Scout Masters Competition 2019’ held in Jaisalmer Military Station, Rajasthan from August 6-14,2019. Indian Army was trained under the aegis of Southern Command. 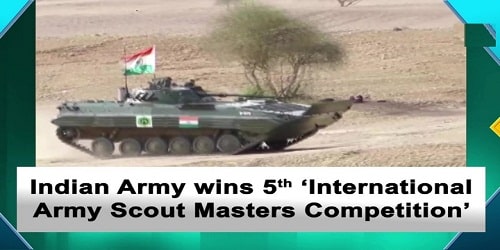 Key points:
i. Organizer: Indian Army’s ‘Konark Corps’ was organized this event.
ii. Teams: Besides India, the teams from Armenia, Belarus, China, Kazakhstan,  Russia, Sudan, and Uzbekistan participated in this prestigious event.
iii. Stages: The 5 stages of the competition include infiltration and ambush, scout specialist course, scout trail obstacle course, small arms firing, floatation, and exfiltration.
iii. Infrastructure:  world-class infrastructure was created for the event, which included a challenging obstacle course for the infantry combat vehicles spread over 6.7 km with 15 obstacles and another tough obstacle course for the scout masters teams with 22 obstacles over 1.3 km.
iv. Closing ceremony: Union Defence Minister Rajnath Singh was the Chief Guest at the Closing Ceremony & it was attended by General Bipin Rawat, Chief of the Army Staff, Lieutenant General SK Saini, General Officer Commanding in Chief Southern Command, officials from participated nations and members of the International Organising Committee.
v.Previous editions:  The previous four editions of the competition were held in Russia.

Army Scouts Masters Competition:
i. It is a part of International Army Games directed by Russia.
ii. The aim of this event is to foster military co-operation between the participating nations, develop trust between the armies for establishing a peaceful society, improving professional training and sharing of best practices being followed by participating nations.