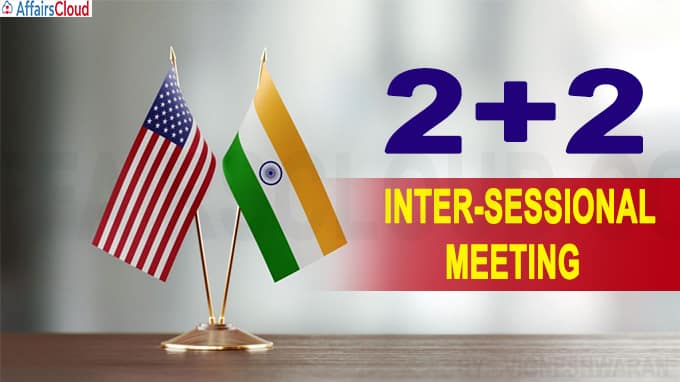 On September 11, 2020, India-United States (US) 2+2 Inter-sessional Meeting was held virtually to discuss bilateral, regional, and multilateral issues including combating COVID-19, counter terrorism, India’s membership on the United Nations Security Council (UNSC), efforts to counteract recent destabilizing actions in South Asia, and the broader Indo-Pacific region. This Inter-sessional meeting was set up pursuant to the India-US 2+2 Ministerial Dialogue which is expected to take place later this year.

-The countries decided to further strengthen the US-India-Australia-Japan quadrilateral consultations.

-Both side also agreed to pursue their quest for a free, open, inclusive, peaceful and prosperous Indo-Pacific.

-They reviewed the progress and developments in bilateral ties in defence, security, and foreign policy areas since the last 2+2 Ministerial meeting held on 18 December 2019 in Washington D.C.

On July 6, 2020, the United States of America (USA), as a depositary of the 1946 Constitution of the World Health Organization (WHO), formally notified the United Nations (UN) of its decision of withdrawal from the global health body, WHO . The US, which has been a party to the WHO Constitution since June 21, 1948 is the largest funder to the WHO, contributing more than USD 450 million per annum.