On November 2, 2019 the Georgetown Institute for Women, Peace and Security(GIWPS), America in collaboration with The Peace Research Institute of Oslo (PRIO), Norway, released its 2nd edition of the report titled Women, Peace, and Security (WPS) Index for the year 2019. India was ranked 133rd out of 167 countries. The list was topped by Norway which was followed by Switzerland and Finland in the second and third places respectively. The index report in detail are as follows, 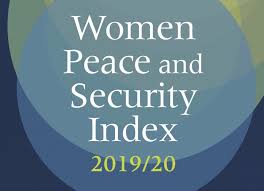 Key Points:
i.The WPS Index systematically measures the wellbeing of women worldwide and ranks them based on 11 indicators under inclusion (education, financial inclusion, employment, cell phone use, parliamentary representation), justice (legal discrimination, son bias, discriminatory norms) and security (intimate partner violence, perception of community safety and organized violence) categories. India’s rank (133) in the index was considered as low, as it did not perform well in any of the three categories.

ii.Performance: In the assessment, it was reported that only Iceland performed well in all aspects analysed. Yemen was ranked last at 167th place in the index.