About the HDI Report 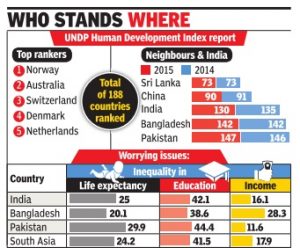 The index was based on three dimensions:

When considering the overall performance, the report said that the average human development improved significantly since 1990 but still the progress is uneven, with systemic discrimination against women, indigenous peoples and ethnic minorities.

About the Human Development Index

The Human Development Index devised and launched in 1990 is a ranking of countries based on the developments made with a peace-centric model of progress.