On January 20, 2020, According to the “Global Investment Trend Monitor report 2020” released by United Nations Conference on Trade and Development (UNCTAD), India ranked 8th among the top 10 countries attracting foreign direct investment (FDI) in 2019. During this period FDI in India grew by 16 % to $ 49 billion(bn). This led to a surge in FDI growth in South Asia (SA), which recorded a 10% increase in FDI to $ 60 billion.
Top 3: The United States (US) remained the largest recipient of FDI in flow, attracting $251 billion, followed by China with flows of $140 bn & Singapore with $110 bn. 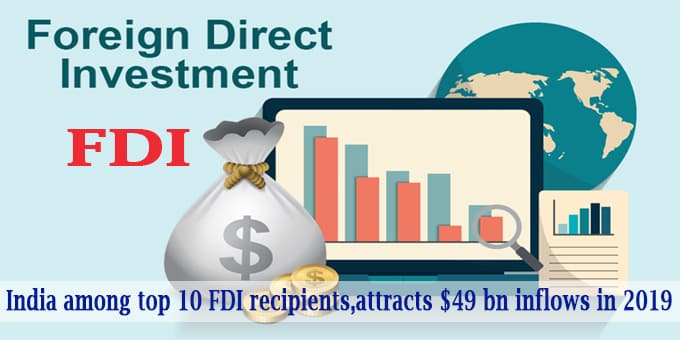 i.Global FDI :Foreign direct investment globally fell by 1% to $1.39 trillion. In 2018 it stood at $ $1.41 trillion.The report noted that investment has declined due to weakness in macroeconomic performance and uncertainty on policy front including trade stress.

ii.The report states that developing economies have attracted FDI flows at a stable to $695 billion. Latin America and the Caribbean witnessed an increase of 16%.While, the developed countries remained at a record low level, declining by a further 6% to $643 billion. FDI inflow to the European Union (EU) decreased by 15% to $305 billion & in the UK (United Kingdom) FDI was fell by 6% as Brexit unfolded.

iii.Cross Border Mergers and Acquisitions (M&A): It has witnessed the lowest level since 2014 by 40 % in 2019 to $490 billion due to sluggish Eurozone growth and Brexit, European M&A sales volume halved to $190 billion.
The decrease in global cross-border M&As sales was primarily focused on the services sector (a 56 % decline to $207 billion), followed by manufacturing (a 19 % decline to $249 billion) & primary sector (14 % decline to $34 billion).Especially sales of assets with respect to financial & insurance activities and chemicals decreased sharply.However US remains saw a significant M&As sales accounting for 31 % of total M&As.

iv.2020 prediction:The report also expect the FDI flows to increase moderately in the year 2020 as current estimation show the global economy to improve somewhat from its weakest performance since the 2009 global financial crisis.
As per the report, GDP growth, gross fixed capital formation and trade tend to increase, both at the global level & in large forerunning markets.