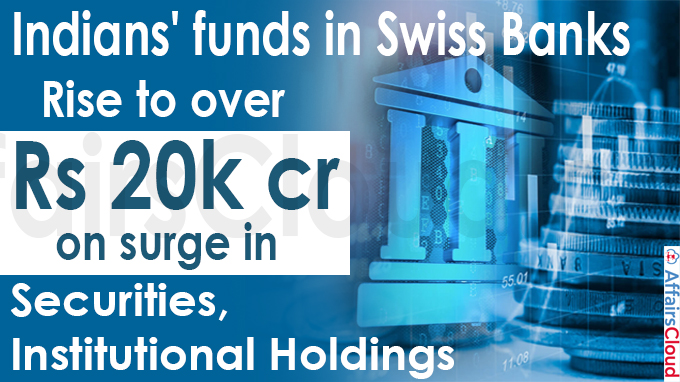 According to ‘Annual Bank Statistics of 2020’ released by Swiss National Bank (SNB), the Central of Bank of Switzerland – India with Swiss Francs (CHF) 2.55 billion ( ~ INR 20, 706 Crore) has been placed at 51st place in the list of foreign clients’ money in Swiss Banks during 2020. The United Kingdom (UK) topped the list with CHF 377 billion, followed by US (152 billion).

Fact – The data is based on official figures reported by the bank to SNB; they do not indicate the amount of black money held by Indians in Switzerland.

iii.Based on the aggregate funds, among BRICS Nations, India was ranked below China & Russia, but above South Africa & Brazil.

The ‘Locational Banking Statistics’ of the Bank for International Settlement (BIS), a reliable measure for deposits by Indian individuals in Swiss banks indicated an increase of 39% in aggregate funds of Indians during 2020 – USD 125.9 million (INR 932 Crore).