India has been ranked 20th on Climate Change Performance Index (CCPI) 2017 according to Germanwatch and Climate Action Network Europe Publication. 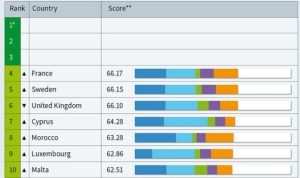 According to the publication in international climate politics and aims to put political and social pressure on those countries which have, up until now, failed to take ambitious action on climate protection.