On September 4, 2019, The 3rd round of meeting between officials of India & Pakistan on the modalities for operationalization of the Kartarpur Sahib Corridor held at Attari in Amritsar, Punjab. This is the second meeting between the two countries in the backdrop of tensions arising between India and Pakistan after the withdrawal of special state status from Jammu and Kashmir(J&K). The Indian delegation was led by SCL Das, Joint Secretary, Ministry of Home Affairs and the Pakistani delegation led by Dr. Mohammad Faisal, Director General (South Asia and SAARC), Ministry of Foreign Affairs. 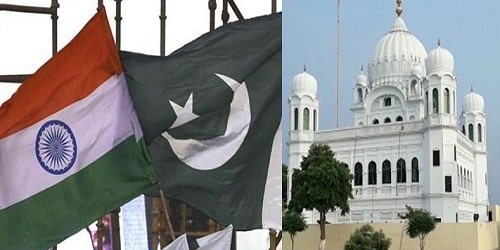 Key points:
i. The meeting reviewed the progress reached in the two rounds of Joint Secretary Level meetings held on 14th March 2019 at Attari, India & on 14th July 2019 at Wagah, Pakistan and four rounds of Technical Level meetings.
ii. Key understanding arrived by both the delegations are,

iii. These agreements were not be finalized as Pakistan demanded on charging a service fee for allowing pilgrims to visit Gurdwara & also it expressed its unwillingness to permit the presence of protocol officials at the Gurdwara premises to accompany the pilgrims.
iv. Both sides have also agreed upon maintaining a safe and secure environment for the movement of pilgrims.
v. Significant progress has been made in setting up a  state-of-the-art infrastructure, including passenger terminal on the Indian side that can handle over 15000 pilgrims in a day and it is targeted to be completed by 31st October, 2019.

Kartarpur Sahib corridor:
It is a proposed border corridor between the nations of India and Pakistan, connecting the Sikh shrines of Dera Baba Nanak Sahib (located in Punjab, India) and Gurdwara Darbar Sahib Kartarpur (in Punjab, Pakistan).