India set to become the world’s largest steel producer after China while boosting exports to the highest ever. India becomes the “Bright Spot”for growth in the global steel industry

India’s output jumped 11% to 101.3 million metric tons and the nation was become a net exporter for the first time in 3 years. 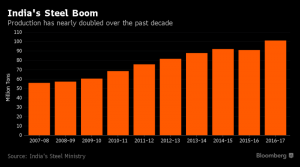 The history of the modern Steel Industry began in the late 1850 but since steel has been basic to the world’s industrial economy.