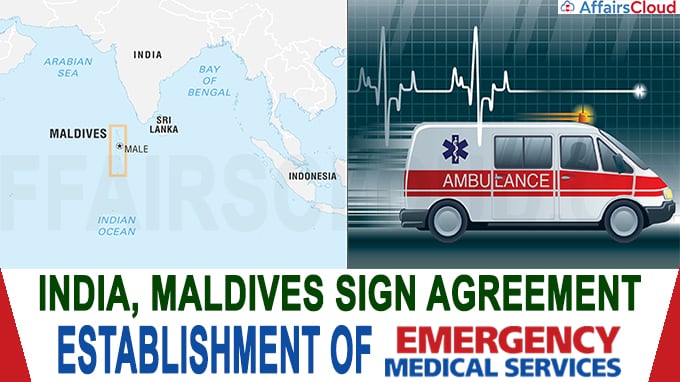 On July 20, 2020, the Government of India (GoI) has signed an agreement with Ministry of Health of Maldives for the establishment of ‘Emergency Medical Services Unit’ at Baa Atoll Dharavandhoo Hospital in Male.The project would cost MVR (Maldivian rufiyaa) 8.5 million (Approximately Rs 4,14,58,782) out of which MVR 7.5 million (Approximately Rs 3,64,03,786) is grant from India. It will be constructed by LF Construction Pvt Ltd of Maldives.

-The establishment of Emergency Medical Services unit in Maldives is one of the several small and medium projects that are being financed by India under the overarching grant assistance of around US$20 million.

-The emergency medical service unit will enhance timely access to quality emergency care and also increase the collaboration between healthcare facilities and disaster response agencies during critical times of need.

On April 28, 2020, India has extended $ 150 million foreign currency swap support to Maldives to help reduce the impact of the COVID-19. On behalf of India, this facility has been extended under the $ 400 million currency swap agreement between the two countries signed in July 2019. Maldives is the only country other than Bhutan to have been given this facility.