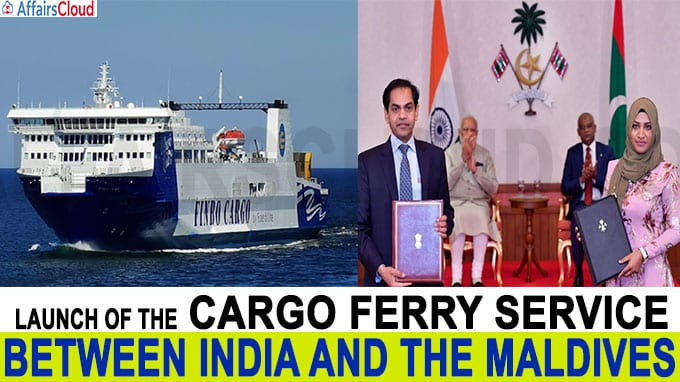 On September 21, 2020 Minister of State (MoS) (Independent Charge) for shipping, Mansukh Mandaviya and Minister of Transport and Civil Aviation of Maldives, Aishath Nahula jointly launched the First Ever Direct Cargo Ferry Service between India and Maldives. The services will be a big boost for business communities in India and Maldives to expand their business and trade relations.It is considered to be the new connectivity effort has begun in Indian Ocean Region.

The Ceremony was attended by representatives from Tuticorin and Cochin ports and Officials from Maldives Ports Limited (MPL) and Foreign Ministry of Maldives.

i.The service will connect the Indian ports of Tuticorin, Cochin Ports with Kulhudhuhfushi and Male Ports in the Maldives.

ii.The Cargo Ferry Vessel “MCP Linz” will be operated by Shipping Corporation of India (SCI). India will subsidize the service approximately at $ 3 Million.

i.Indian medium and small-size enterprises are expected to benefit from the services.

ii.Maldivian Exporters of Tuna and other marine products will get an opportunity to enter the Indian market. It will also open the possibility of sending their goods to Europe through Cochin and Tuticorin ports.

iii.The Maldives Majlis (Parliament) has announced a 50% reduction in custom duties for import items which are cleared at Kulhudhuffushi port.

iv.With the expansion of Hanimaadhoo Airport (via Indian credit line), the freight ferry service link to the northern port of Gulhudufushi will ensure the economic growth of the Northern Maldives and facilitate investments in other machinery for tourism and prosperity.

i.MCP Linz is capable of carrying 380 TEUs (Twenty-foot equivalent unit) and 3000 MT (Metric Tonnes) on bulk cargo. It will have a turnaround time of 10-12 days for its voyages.

iii.It is capable of carrying all types of commodities such as electrical machinery, furniture, pharma products and other perishable goods.

i.India, Maldives had signed a Memorandum of Understanding (MoU) on ferry services during Prime Minister Narendra Modi’s visit to Maldives in June 2019.

Federation of Indian Chambers of Commerce and Industry (FICCI) carried out the feasibility study on the Cargo Ferry Service.

ii.The decision to launch the service was announced in a virtual meeting between Union Minister of External Affairs, S Jaishankar and Maldives Foreign Minister Abdulla shahid on August 13, 2020.

i.On July 28, 2020, the Financial Assistance for High Impact Community Development Projects (HICDP) from the Government of India handed over to the Government of Maldives in the form of a symbolic cheque of USD 5.6 million.

ii.On August 10, 2020, India and Maldives signed a contract for the development of five eco-tourism zones in Addu atoll of Maldives during an online signing ceremony held from Addu City.