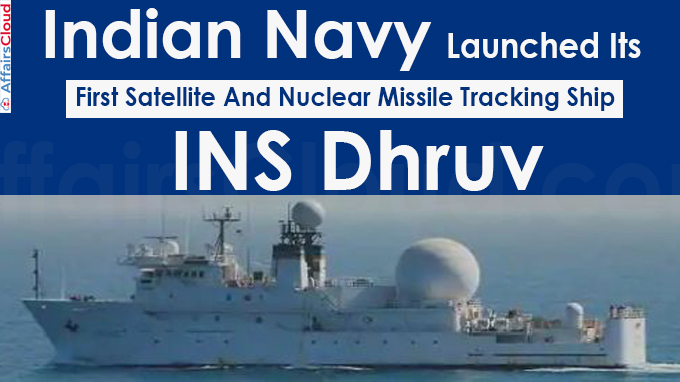 India has launched its first satellite and nuclear-missile tracking ship INS (Indian Naval Ship) Dhruv. It is the first of its kind ocean surveillance ship (OSS) that is capable of tracking ballistic missiles at a long-range.

i.It is built by the Hindustan Shipyard Limited (HSL) in collaboration with the DRDO (Defence Research and Development Organisation) and NTRO (National Technical Research Organisation).

iii.Its outlay is around Rs 750 crore.

i.The ship was built inside the covered dry dock.

ii.It has the capacity to carry a 300-crew with hi-tech gadgets and communication equipment, powered by two diesel engines, and a large deck capable of helicopter landing.

iv.It will also be able to map ocean beds for research and detection of enemy submarines.

v.It will also help in monitoring the flight trajectories and telemetry data of the Agni land-based missiles and ‘K’ series of submarine-launched ballistic missiles launched by India.

It should be noted that with the induction of INS Dhruv, India joins France, the United States (US), the United Kingdom (UK), Russia, and China, who possess and operate such ships.