India and Indonesia are set to begin their Joint Military Exercise Shakti IV from March 10-23 in Indonesia. 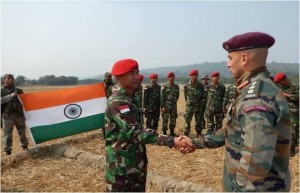