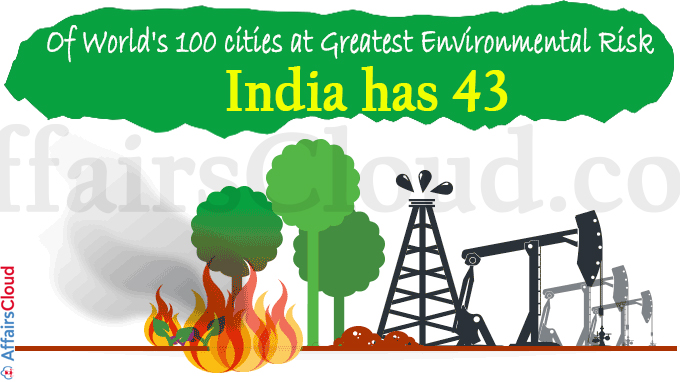 According to the ‘Environmental Risk Outlook 2021’ released by Verisk Maplecroft,  India has 43 of the World’s 100 most environmentally riskiest cities. Jakarta in Indonesia was ranked as the most riskiest city in the world, followed by Delhi & Chennai (Tamil Nadu).

Asia has the World’s most densely populated which puts pressure on water sources and compounds pollution from the widespread burning of coal and biomass fuels–but also has a large number of so-called “natural hazards” built into its geography.

i.Around the world, 1.5 billion  people live in 414 cities that are at high risk from pollution, water shortages, extreme heat, and the impacts of climate change.

ii.Outside Asia, the Middle East and North Africa (MENA) has the largest proportion of cities categorised as high risk.

March 17, 2021, According to the ‘2020 World Air Quality Report’ released by IQAir, India was the 3rd Most Polluted Country in the World in 2020 after Bangladesh & Pakistan. Delhi was the most polluted Capital City for the 3rd consecutive time; it was followed by Dhaka (Bangladesh) & Ulaanbaatar (Mongolia).