With an aim to improve their ties, India and Egypt decided to put in place a bilateral framework for enhancing cooperation in key areas of security, counter-terrorism, defence and investments. Both the sides agreed to step up engagement in a variety of potential areas whereas underlining the necessity to fight terrorism notably the dreaded terrorist outfit ISIS (Islamic State of Iraq and Syria) in an efficient manner. 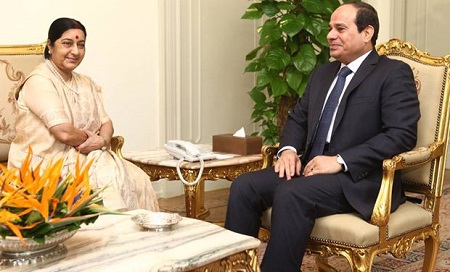 As per the plan, a bilateral framework of cooperation in all fields, particularly in the fields of security, counter- terrorism, defence, trade and investments are being put in place to step up engagement in these areas. Both sides reviewed the entire gamut of relationship and decided to diversify defence cooperation from training of personnel to defence production.

As per Secretary East in Ministry of External Affairs Anil Wadhwa, both the countries had a discussion briefly on the Palestinian issue and their stands are similar. Both the countries will support each other at the United Nations as well. Also a discussion about the three pillars of cooperation that are political and safety pillar, financial and investments and other people-to-individuals contact took place during the meet.

Egypt has historically been certainly one of India’s most essential buying and selling companions within the African continent. Trade between India and Egypt over the past financial year has been recorded at USD 4.76 billion. Also India’s imports from Egypt have been value USD 1.74 billion throughout 2014-15. So this bilateral framework will definitely help boosting these two countries’ economies and mutual development too.