The U.S. Commission on International Religious Freedom (USCIRF) in its Annual Report 2020 has downgraded the Indian ranking by naming it into the list of “Country of Particular Concern (CPC)”i.e. Tier 1 from“Special Watch List i.e.“Tier-2” in 2019 report. This is the first time since 2004 that India has been placed in this category for engaging in and tolerating systematic, and ongoing religious freedom violations, as defined by the International Religious Freedom Act (IRFA), 1998. 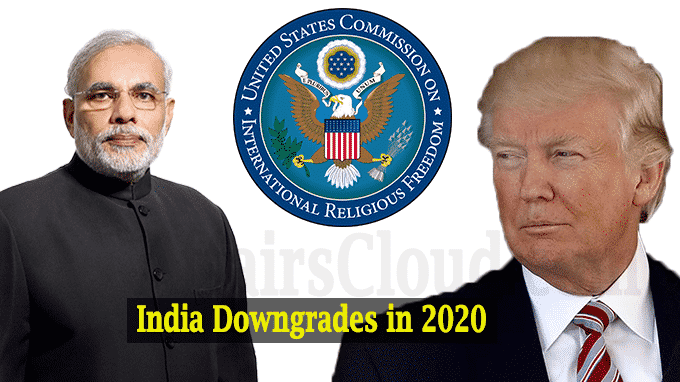 Activities in India resulting decline in India’s rank, as per report
As per the report, the Indian government is formulating policies that violate religious freedom across the nation, especially for Muslims which are as follows:

Recommendations by USCIRF against India to US State Department

-The commission recommended that the United States (US) government take stringent action against India under the IRFA, 1998.

-It also recommended imposing targeted sanctions on Indian government agencies and officials responsible for severe violations of religious freedom by freezing their assets and/ or barring their entry into the US.

India-US Relations
Though India-US relations saw positive developments in 2019 like strengthening of
Security and defence sector but at the same time, U.S. officials also highlighted concerns with India’s religious freedom violations through public statements, congressional hearings, and bilateral engagements.  However, the Indian government rejected the US State Department’s and USCIRF’s reporting on religious freedom violations in India.

About IRFA, 1998
Enacted in 1998 by the US Congress, it promotes religious freedom as a foreign policy of the United States.