In year 2015, the World Health Organisation (WHO) had released a Global Action Plan on Antimicrobial Resistance (AMR) and passed a resolution urging member countries to develop and submit country specific National Action Plans on AMR by May 2017.

What is Antimicrobial Resistance (AMR)?

AMR is the evolutionary ability of microbes such bacteria, virus and parasite to become resistant to medicines which treat the diseases caused by them. 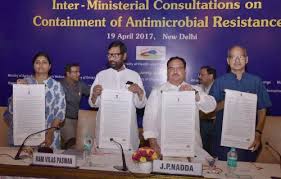 Mr. Nadda mentioned that India’s National Action Plan has incorporated inputs from various stakeholders. He added that the problem of AMR needs to be addressed holistically under “One Health Approach”. He urged all State Govts. to come up with state specific action plan on AMR and assured all possible support from Central Govt. for the same.