India rose its and standard and ranked at 41st position on the IMD World Competitiveness Scoreboard, 2016.

Hong Kong takes the place of US by the World’s most competitive economy.

Reasons for the depreciation: 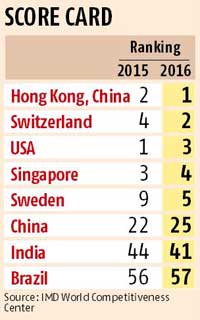 But the performance criteria on price level is uttermost failure having rank 55 in 2016 from 37 position in 2015.