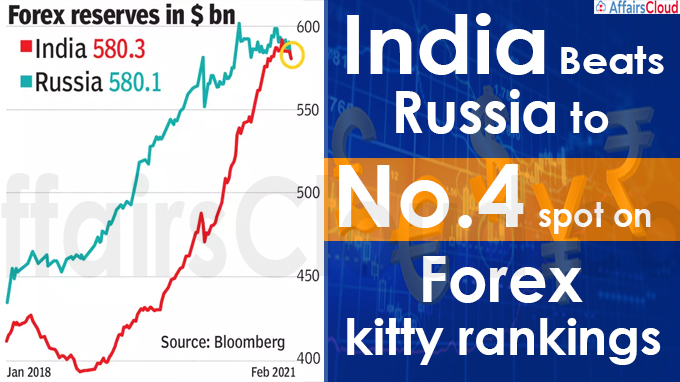 As per the Reserve Bank of India’s (RBI) data, India’s Foreign exchange (Forex) reserves to become the world’s fourth-largest by surpassing Russia. India’s foreign currency holdings fell by $4.3 billion to $580.3 billion and Russia’s forex holdings were $580.1 billion. As of March 2021, International Monetary Fund(IMF)table, China has the largest reserves, followed by Japan, Switzerland, India, and Russia.

Benefits of having a strong forex reserves position:

In 2020, the RBI bought a net $88 billion in the spot forex market, this made the Indian rupee the worst performer among Asia’s major currencies and earned India a place on a US Treasury watchlist for currency manipulation.

The RBI Act, 1934 provides the legal framework for the deployment of forex reserves.

Objective: To limit external vulnerability by maintaining foreign currency liquidity to absorb shocks during times of crisis or when access to borrowing is curtailed.

As per the 12th edition of World Economic League Table 2021 (WELT), an Annual report released by the Centre for Economics & Business Research Ltd (CEBR), India slumped 1 spot to 6th Largest Economy (out of 195 countries) in the world in 2020 from 5th in 2019 due to the impact of COVID19. The United States (US) topped the 2020 rankings followed by China & Japan.