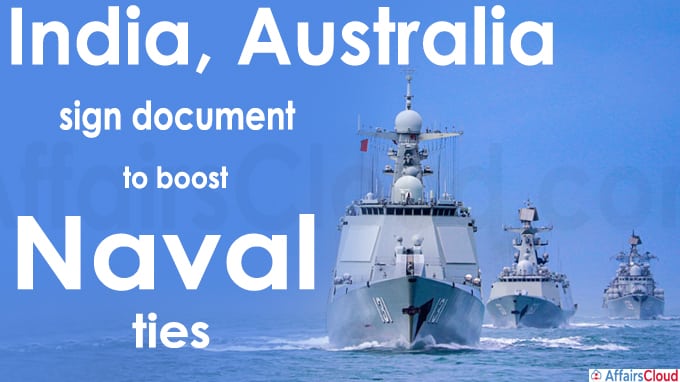 On August 18, 2021, a ‘Joint Guidance for the Australia-India Navy to Navy Relationship’ document was signed between the Indian Navy and Royal Australian Navy during a virtual ceremony.

i.The document aims to ensure a shared approach towards regional and global security that will cater to their commitment to promote peace, stability and prosperity in the Indo – Pacific region.

ii.It represents the intent of both navies to work together bi/ multi-laterally by developing mutual understanding, and collaborate in mutually beneficial activities.

i.Apart from 2020 SCP, there is Mutual Logistics Support Agreement (MLSA) which allows militaries of the two countries to use each other’s bases for repair and replenishment of supplies, besides facilitating scaling up of overall defence cooperation.

ii.Australian and Indian Navies, along with the navies of United States (US) and Japan are members of the four-nation Quadrilateral Security Dialogue, or the Quad, which has irked China. They will also participate in the Malabar Naval Exercise later this year.

Kotak Mahindra Bank (KMB) signed a Memorandum of Understanding(MoU) with the Indian Navy to offer a salary account to all the personnel of the Indian Navy including both serving and retired personnel. The signing of the MoU was jointly chaired by Commodore Neeraj Malhotra (commodore pay and allowances) of the Indian Navy and Parminder Varma, business head (corporate salary), KMB, in New Delhi.