The Centre is likely to move the Supreme Court against a Meghalaya high court order asking it to impose the Armed Forces (Special Powers) Act, 1958 and deploy the Army and paramilitary forces in insurgency-hit Garo Hills. 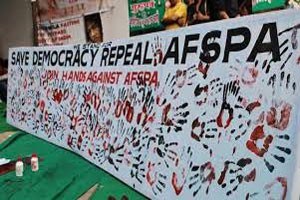 The imposition of AFSPA  :

For the purpose of enabling the civil authorities in the state to effectively deal with militancy so that there is a regime of rule of law.

The order was issued by