International Day of Peace and World Alzheimer’s Day is celebrated every year on September 21, 2016 across the world.

The International Day of Peace, sometimes unofficially known as World Peace Day, is observed annually on 21 September. It is dedicated to world peace, and specifically the absence of war and violence, such as might be occasioned by a temporary ceasefire in a combat zone for humanitarian aid 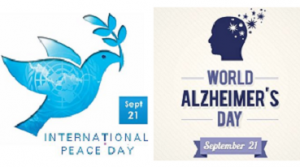 World Alzheimer’s Day, September 21st of each year, is a day on which Alzheimer’s organizations around the world concentrate their efforts on raising awareness about Alzheimer’s and dementia.