In World University Rankings 2020, published by the United Kingdom (UK) based Times Higher Education (THE), Indian Institute of Technology (IIT) Ropar and Indian Institute of Science (IISc) Bangalore were ranked number 1 among the 56 Indian institutes on the list of the best universities of the world, beating IIT Bombay and IIT Delhi. Since 2012, for the first time Indian institutions did not feature among the top 300 in World University Rankings 2020. The University of Oxford tops the 2020 edition of the rankings for the fourth consecutive year. 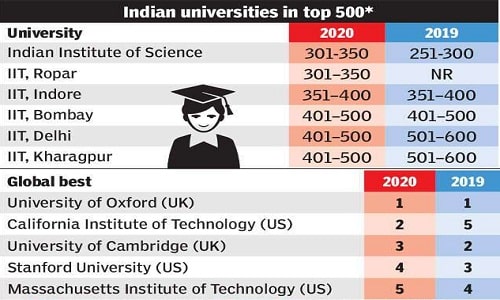 Key Points:
i. Jamia Millia Islamia, Jawaharlal Nehru University, Panjab University, Savitribai Phule Pune University and Thapar University were in the top 601-800 universities of the world.
ii. Siksha ‘O’ Anusandhan and Kalinga Institute of Industrial Technology (KIIT) University from Odisha made it to the World University Rankings 2020.
iii. Mysore’s Jagadguru Sri Shivarathreeswara (JSS) Academy of Higher Education and Research, which was featured with IIT Bombay and IIT Roorkee in the 3rd place last year, did not make into the World University Rankings 2020.
iv. The rankings were released on September 11, 2019, at the THE World Academic Summit in Zurich, Switzerland and the event was hosted in partnership with ETH Zurich University.
v. IISc, which made into the top 300 last year, dropped into the 301-350 bracket this year.
vi. Overall 1,400-universities across the world from 92 countries featured in the list.
vii. India is the fifth most represented country in the list and the third most-represented in Asia after Japan and mainland China.
Top 3 Indian Institutes:

Top 3 Universities of the World: