Welcome to Online Reasoning Section with explanation in AffairsCloud.com. Here we are creating Best question samples for IBPS PO 2017. We have included Some questions that are repeatedly asked in bank exams !!! 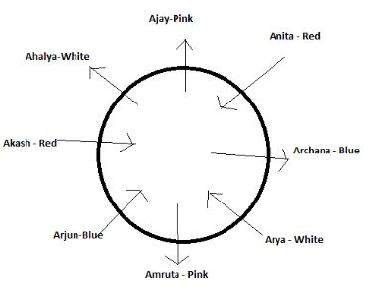 Q (6-10). Study the following information carefully to answer the given questions.

Eight People – Sachin, Saketh, Shreyas, Sudhir, Sourav, Sandeep, Suraj & Sampath lives in a building which as floor numbers one to eight not necessarily in same order. The topmost floor is numbered eight and the lowermost floor is number one. Seven of them only own cars of different companies Hyundai, Honda, Ford, Toyota, Renault, Suzuki & Chevrolet.
Sandeep lives on an odd number floor above floor number four. Shreyas lives one of the odd number floors above one who owns Suzuki car. Only one person lives between Saketh and one who owns Renault car. Only three people live between Sudhir and the one who owns Suzuki Car. The one who owns Chevrolet Car lives immediately above Suraj. Sourav doesn’t own Chevrolet Car and he does not live on the top floor. Only three people live between Suraj and Sachin.One who does not own any car lives immediately above the one who owns Honda car, but not on the topmost floor. Only one person lives between Sandeep and one who owns Ford car.One who owns Ford car lives above Sampath. The number of
people living above Sandeep is same as the number of people living between Sandeep and Sudhir. Only two people live between Shreyas and the one who owns Hyundai car. 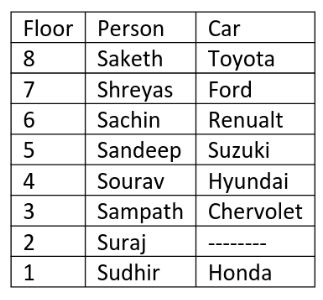