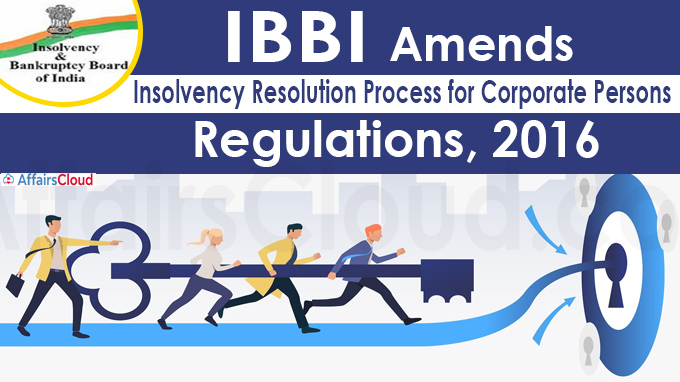 Insolvency and Bankruptcy Board of India (IBBI) amended the IBBI (Insolvency Resolution Process for Corporate Persons) Regulations, 2016 to enhance the discipline, transparency, and accountability in corporate insolvency proceedings.

ii.IBBI amended the regulations and directed the insolvency professional (IP), who is conducting the Corporate Insolvency Resolution Process (CIRP) to disclose all former names and registered office address(es) so far changed (2 years) preceding the commencement of insolvency along with the current name and address of the CD.

iii.IBBI also allowed the IRP/ RP to appoint any professional, including registered valuers, to assist him in the discharge of his duties while conducting the CIRP.

About Insolvency & its Regulator:

i.Insolvency: It is a situation where individuals or companies are unable to repay their outstanding debt.

iii.Insolvency Regulator: The Code establishes the IBBI), as an insolvency regulator to oversee the insolvency proceedings in the country and regulate the entities registered under it.

On March 19, 2021, in New Delhi, the Insolvency and Bankruptcy Board of India (IBBI) in association with the British High Commission has prepared and released a publication titled “Handbook on Ethics for Insolvency Professionals: Ethical and Regulatory Framework”, a practical guide for insolvency professionals(IPs) for discharging their duties ethically.

About Insolvency and Bankruptcy Board of India(IBBI):