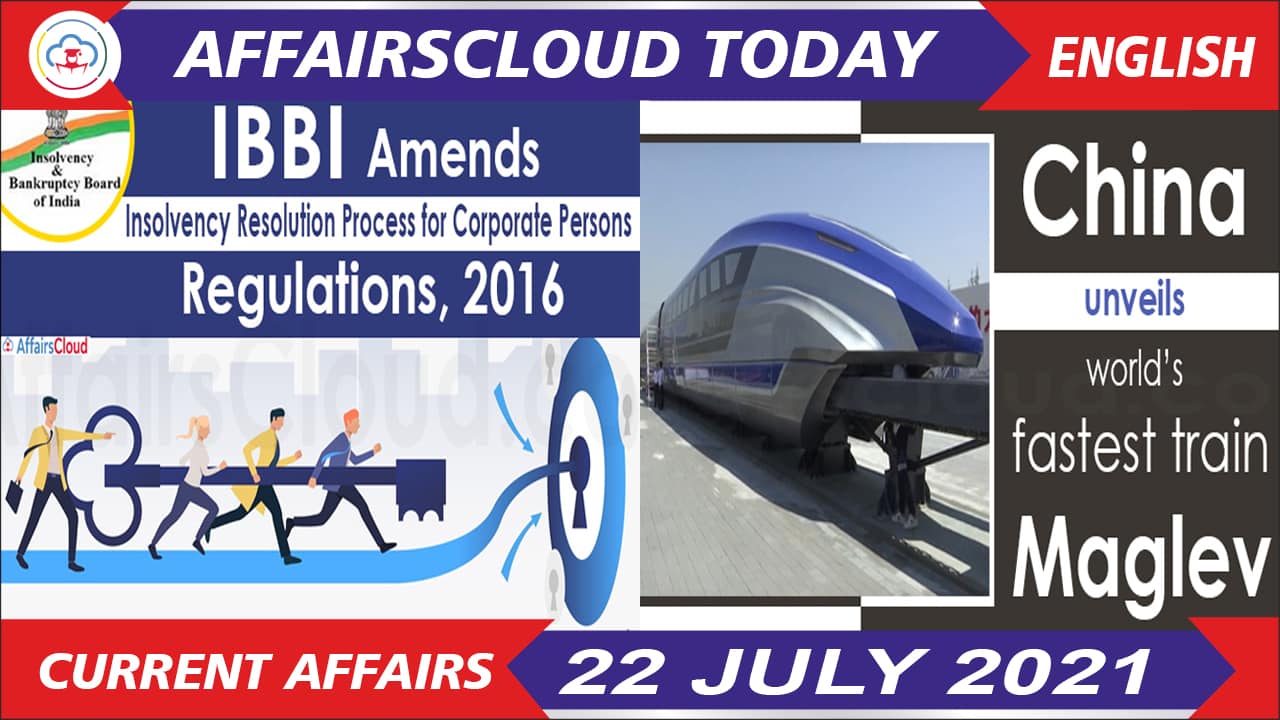 Insolvency and Bankruptcy Board of India (IBBI) amended the IBBI (Insolvency Resolution Process for Corporate Persons) Regulations, 2016 to enhance the discipline, transparency, and accountability in corporate insolvency proceedings.
Amendments:
i.To reorganise the CD, the interim resolution professional (IRP)/ resolution professional (RP) were directed to find out either the Corporate Debtor (CD) is subjected to avoidance transactions and required to file an opinion about that to the Adjudicating Authority.ii.IBBI amended the regulations and directed the insolvency professional (IP), who is conducting the Corporate Insolvency Resolution Process (CIRP) to disclose all former names and registered office address(es) so far changed (2 years) preceding the commencement of insolvency along with the current name and address of the CD.
iii.IBBI also allowed the IRP/ RP to appoint any professional, including registered valuers, to assist him in the discharge of his duties while conducting the CIRP.
About Insolvency and Bankruptcy Board of India(IBBI):
Establishment – 1st October, 2016 under the Insolvency and Bankruptcy Code, 2016
Headoffice – New Delhi
Chairperson – M. S. Sahoo
>>Read Full News 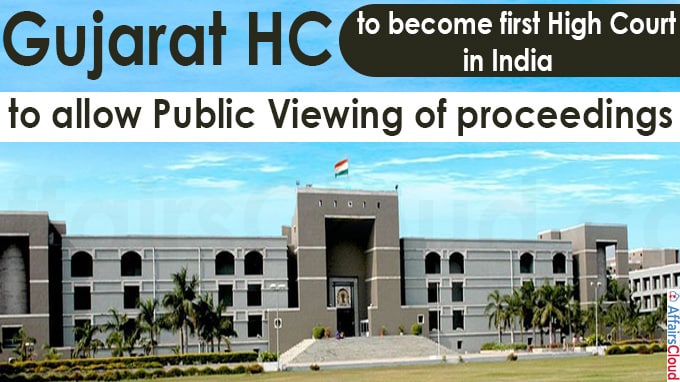 The High Court (HC) of Gujarat became the first court of India to formally start live streaming of proceedings on its YouTube channel to ensure transparency and openness in the Indian judiciary. It was launched on the eve of the 101st birth anniversary of Late Former CJI (16th) Yeshwant Vishnu Chandrachud by the Chief Justice of India (CJI) Nuthalapati Venkata (NV) Ramana.

Key Points:
i.Live-streaming of proceedings will cater to the dissemination of information, which is an important aspect of Article 19 (right to freedom of speech and expression) of The Constitution of India 1949.
ii.People can get first-hand information about the entire proceedings and the opinions of the judges cutting misconceptions caused due to lack of direct access.
iii.Supreme Court will also start this live streaming soon.
Background:
In 2018, the Supreme Court had allowed the live streaming of cases of national importance on the basis of the judgment of Swapnil Tripathi VS Supreme Court. After that from October 26, 2020, Gujarat HC started hearing the cases live on YouTube on an experimental basis from October 26, 2020. Assessment:
The findings are based on the secondary analysis from rounds 3 (2005-06) and 4 (2015-16) of the National Family Health Survey (NFHS) and various rounds of National Sample Survey (NSS).
Key Points:
i.Women’s Literacy: The report shows that women’s literacy has improved across social groups over the years but SC and ST (Scheduled Tribe) women lag behind the general category by 18.6% and 27.9%, respectively.

ii.Sanitation: 65.7% households have access to improved, non-shared sanitation facilities in the general category while SC households are 28.5% behind them and ST are 39.8% behind them. 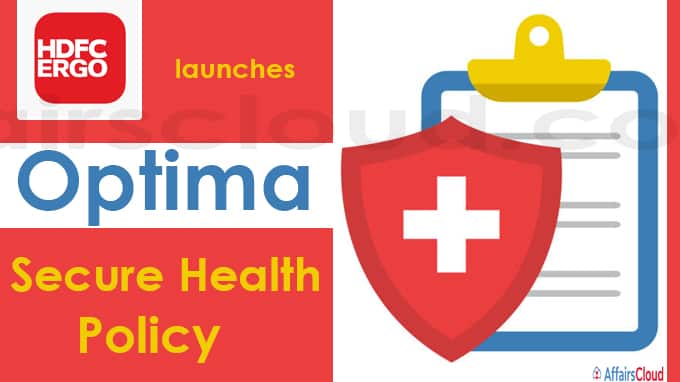 4 Benefits of Optima Secure:
i.Secure Benefit – The plan doubles the insurance cover automatically and instantly on purchase of the policy (eg. if the base cover is Rs 10 lakh it would be doubled to Rs 20 lakh).
ii.Plus Benefit – The base coverage of the policy would be increased automatically by 50 percent after 1 year and to 100 percent after 2 years.
iii.Restore Benefit – If the coverage of the customers is over, the policy would restore their base coverage up to 100 percent.
iv.Protect Benefit – The policy has ‘zero’ deduction on consumables and listed non-medical expenses.
About HDFC ERGO General Insurance:
It is a joint venture (51:49) between HDFC Ltd., the Housing Finance Institution and ERGO International AG, the insurance entity of Munich Re Group.
Headquarters – Mumbai, Maharashtra
MD & CEO – Ritesh Kumar 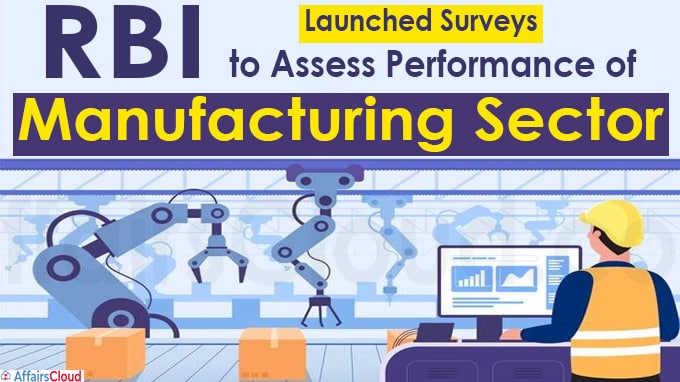 On July 20, 2021, the Reserve Bank of India (RBI) launched the 95th round of the Quarterly ‘Industrial Outlook Survey’ (IOS), which assesses the performance of the Indian manufacturing sector. The reference period for the survey is Q2 FY22 (July-September 2021).

Biteeu India made a partnership with SpaceChain, a space-as-a-service solution provider, to launch its digital security infrastructure into space onboard a SpaceX Falcon 9 rocket as part of the rideshare program.

ii.The space node also provides latency in communication between the ground stations and satellites of up to 12 hours, preventing cyber fraud and theft.
iii.High Security: The storing of public keys in the space will enhance the security of data and transactions from vulnerable cyberattacks, which would occur usually on land-based servers.
Eurasian Space Ventures (ESV), a company that operates and manages Biteeu, signed a Memorandum of Understanding (MOU) with SpaceChain for the current projects and to develop joint projects in the field of space technologies over 2 years.
About Biteeu:
Establishment – 2019
Co-founder and CEO – Talgat Dossanov NSDL Payments Bank has made a strategic partnership with Multilink, a fintech company to build agent points across India to boost the banking facilities in rural and semi-urban areas of India through the Neo banking system. 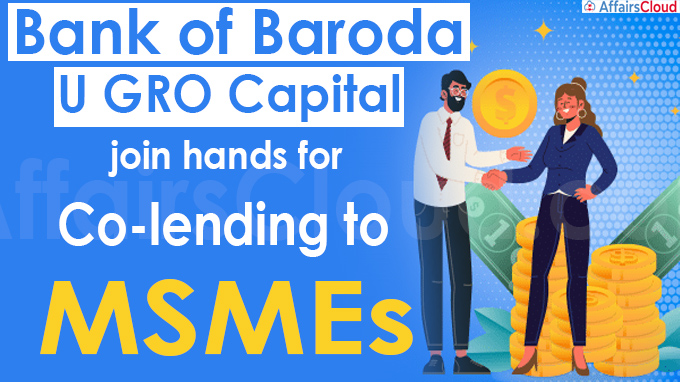 On the eve of Bank of Baroda’s (BoB) 114th Foundation Day, U GRO Capital, a technology-enabled Non-Banking Finance Company (NBFC), made a Co-lending partnership with BoB to lend Micro, Small and Medium Enterprises (MSMEs) at a competitive rate of interest with reduced turn-around time.

ii.The co-lending was based on the Reserve Bank of India’s (RBI) revised Co-Lending Model (CLM).

iii.The co-lending programme for MSMEs also includes the recently added wholesale and retail traders under it.

The Kerala Bank has launched a new loan scheme named ‘Kerala Bank Samagra’ to support the infrastructure development of the Primary Agricultural Credit Cooperatives (PACS). The loan aims to support PACS to create job opportunities in rural areas and overcome the COVID-19. The government of India has announced the launch of the National Logistics Excellence Awards to appreciate the logistics service providers and to recognise the best practices in the Logistics sector including consolidation, process standardisation, technological upgrade, digital transformations and sustainable practices.

The case studies of the best practices in logistics will be showcased as a “Logistics Excellence Gallery” hosted by the Ministry of Commerce and Industry.

Ariel Henry Appointed as the Prime Minister of Haiti 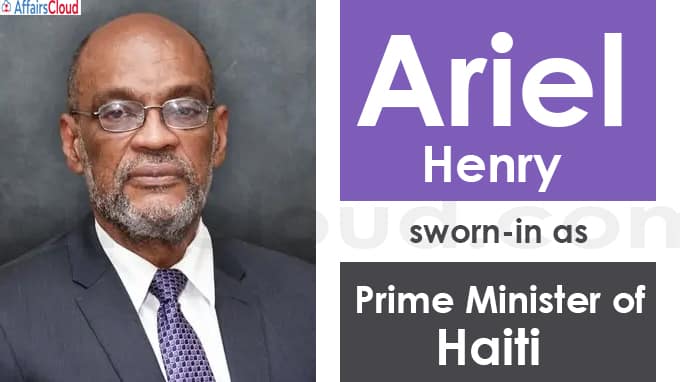 Ariel Henry(71 years old), a member of the political party Inite, was appointed as the new Prime Minister(PM) of Haiti. He took over the charge from the incumbent PM Claude Joseph.

Claude Joseph has stepped down as the PM and continues as the Foreign minister of Haiti.
Background:
Late President Jovenel Moise, has designated Ariel Henry as the Prime Minister of Haiti days before his assassination.
About Ariel Henry:
Ariel Henry is a neurosurgeon and a former cabinet minister who has served in various Ministries like Minister of Social Affairs and Labor and Minister of Interior and Territorial Communities.
About Haiti:
Prime Minister– Ariel Henry
Capital– Port-au-Prince
Currency– Haitian Gourde 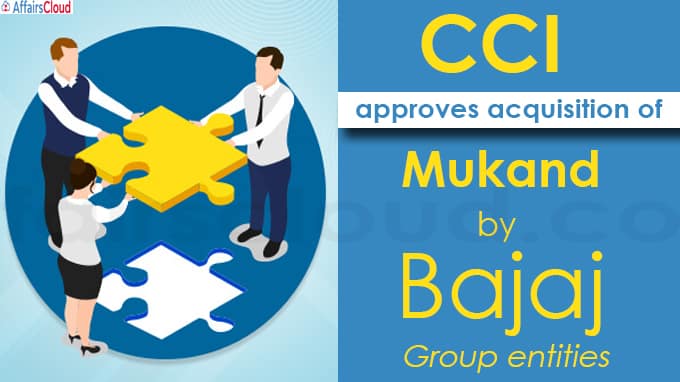 BDL flags off 1st MRSAM Missile for Delivery to IAF Bharat Dynamic Ltd (BDL) officially started the delivery of the 1st Missile of the 1st Firing unit of Medium Range Surface to Air Missile (MRSAM) for delivery to the Indian Air Force (IAF). It was flagged off by MSR Prasad, Director General (Missiles & Strategic Systems) of BDL.

China has unveiled a new Maglev transportation system, which is capable of achieving a maximum speed of 600 kph or 372 mph, in Qingdao, the coastal city in Shandong province of China. The Maglev train developed by China and manufactured in Qingdao is reported to be the world’s fastest ground vehicle available.
This is China’s latest scientific and technological achievement in the field of rail transit.
What is Maglev?
i.Maglev (from magnetic levitation) is a train transportation system, which uses the electromagnetic force and levitates above the track & there will be no contact between the body of the train and rail.
ii.It uses two sets of magnets: one set to repel and push the train up off the track, and another set to move the elevated train ahead, taking advantage of the lack of friction.
Note:
China has been using this technology on a limited scale for around 20 years.
Background:
i.The high-speed maglev train project was launched in October 2016.
The magnetic-levitation train prototype with a designed speed of 600 kilometers per hour(kmh) was developed in 2019 and the successful test run was conducted in June 2020. On July 20, 2021, ‘New Shepard’ Rocket System built by Blue Origin (a Company owned by Amazon’s Founder, Jeff Bezos) successfully completed its 1st human spaceflight with 4 people on board.  It was launched from a private launch site near Van Horn, Texas. Bollywood Filmmaker Rakeysh Omprakash Mehra has authored his debut book – his autobiography – titled “The Stranger in the Mirror”. The book is co-written by noted author Reeta Ramamurthy Gupta. Space Exploration Day also known as Moon Day is annually observed across the globe on 20th July marks the anniversary of America’s Apollo 11, the first manned mission to land on the Moon.
The day aims to encourage people to learn about space exploration and to inspire the youths to consider space science and space exploration as careers.
Background:
On 20th July 1969, NASA (National Aeronautics and Space Administration) astronauts Neil Armstrong and Buzz Aldrin (Americans) became the first humans to set foot on the surface of the Moon.
Apollo 11:
i.The primary objective of Apollo 11 is to perform a crewed lunar landing and return to earth.
ii.Apollo 11 was launched from Cape Kennedy on 16th July 1969 carrying Commander Neil Armstrong, Command Module Pilot Michael Collins and Lunar Module Pilot Edwin “Buzz” Aldrin.
iii.On 20th July 1969, Neil Armstrong became the first human to step on the lunar surface.

Haryana Government to introduce ‘One Block, One Product’ Scheme 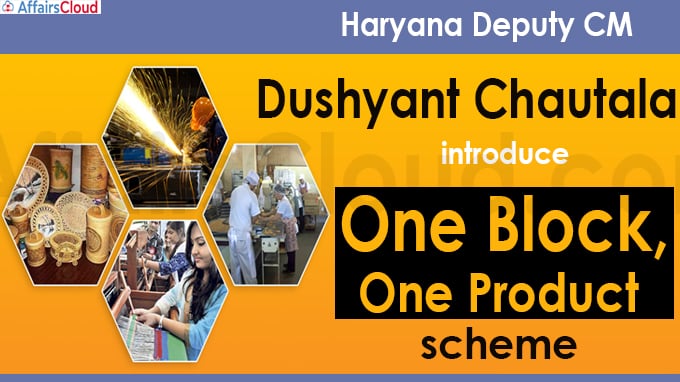 The State Government of Haryana is all set to launch the ‘One Block, One Product’ scheme to encourage and promote small industries in the rural areas. It was announced by the state’s Deputy Chief Minister (CM) Dushyant Chautala.
What is in the scheme?
i.It will be introduced in 137 blocks of the state under which every block will be connected with some industry. The arrangements for common services, lab testing, packaging, transportation, accountancy will be set up in the cluster itself.
ii.This will support the small entrepreneurs of rural areas to compete with large industries.
Key Points:
i.A team of officers constituted for the implementation of this Scheme started working on the selection of industrial products for 137 blocks.
ii.In 2020, Haryana implemented ‘One District, One Product’ Scheme implemented under Micro, Small & Medium Enterprises (MSME) Directorate.
About Haryana:
Capital– Chandigarh
Chief Minister– Manohar Lal Khattar
Governor– Bandaru Dattatraya 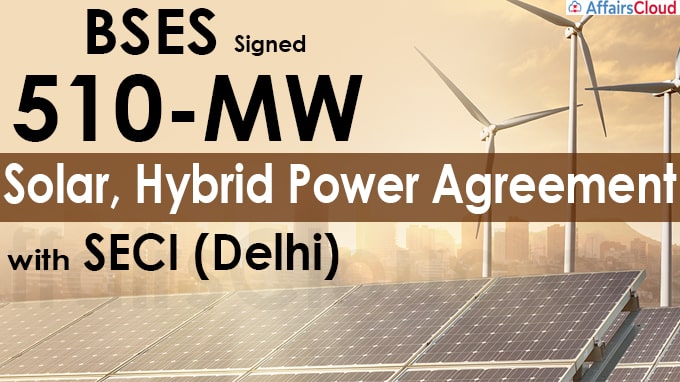 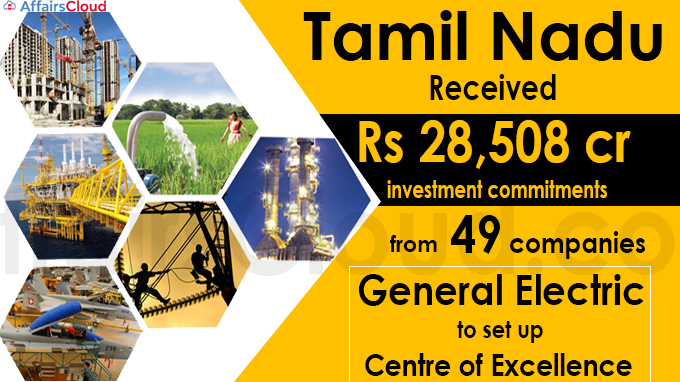