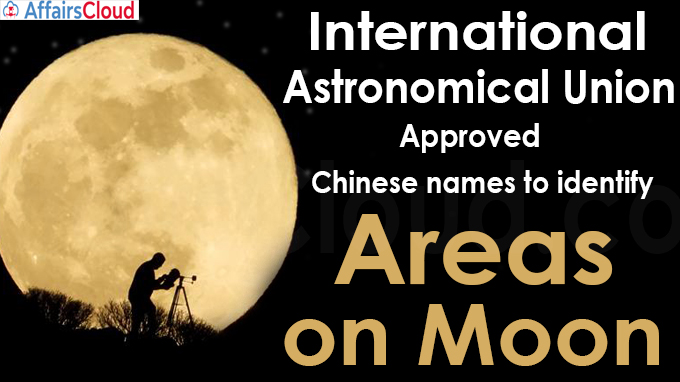 In May 2021, International Astronomical Union (IAU)’s Working Group for Planetary System Nomenclature (WGPSN) gave approval for naming 8 features in the Moon with Chinese names around the location where China’s Chang’e-5 Spacecraft landed in December 2020.

i.Chang’e-5 brought back fresh Lunar samples to Earth, which was previously bought 40-years back by the USA’s 1969 Apollo 11 Mission.

Note- In 2019, China’s Chang’e-4 probe became the 1st spacecraft to land on the dark side of the Moon.

In May 2021, Chinese Spacecraft Tianwen 1 carrying the rover Zhurong landed on Utopia Planitia region, Mars successfully. This makes China only the second country after the US to send a rover to the surface of the Red Planet.

Mission – To promote & safeguard the science of astronomy in all its aspects, through international cooperation.
Founded – 1919
Headquarters – Paris, France
President – Ewine van Dishoeck