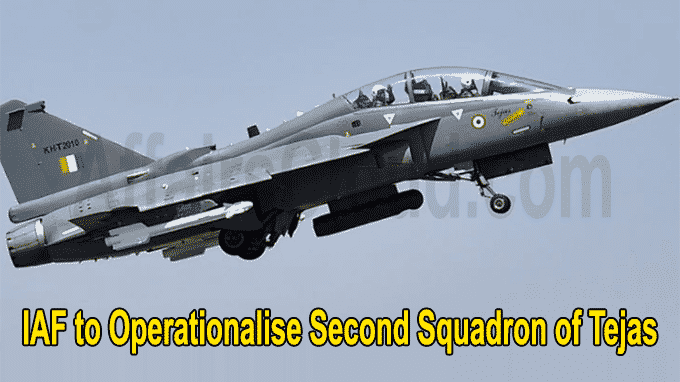 On May 27, 2020 The Indian Air Force(IAF) operationalised its 2nd squadron(Sqn) No. 18 ‘Flying Bullet’ equipped with Light Combat Aircraft (LCA) Tejas (Mk-1)Final Operational Clearance(FOC) at its Sulur Air Force Station in Coimbatore, Tamil Nadu. It was operationalised by Chief of the Air Staff(CAS), Air Chief Marshal (ACM) Rakesh Kumar Singh(R.K.S.) Bhadauria. This Sqn is designed by the Aircraft Development Agency(ADA) under the Defence Research and Development Organisation(DRDO) and manufactured by Hindustan Aeronautics Limited(HAL),  Bengaluru & is the only Param Vir Chakra Sqn of the IAF.

i.The occasion was marked by the presentation of aircraft documents of the Tejas FOC version by the HAL Chairman and Managing Director(CMD), R Madhavan to the CAS. The CAS, then handed over it to the Commanding Officer of 18 Sqn Group Captain Manish Tolani, along with the ceremonial keys to the unit.

ii.The event commenced with a fly past consisting of a helicopter formation of the Mi 17 V5 and the ALH, An-32 transport aircraft and Tejas Mk-1 fighters.

iii.Before the induction ceremony, CAS, ACM, flew a sortie on an Initial Operational Clearance (IOC) aircraft from the No. 45 squadron ‘Flying Daggers’, which is the 1st Sqn operate with the aircraft & was shifted from Bengaluru to Sulur became operational in 2016

i.It was raised on, April 15, 1965 with the motto “Teevra aur Nirbhaya”(Swift and Fearless) in Ambala with the Folland Gnat aircraft.

ii.The squadron participated in the 1971 war with Pakistan and was decorated with  ‘Param Vir Chakra’ which was given to Flying Officer Nirmal Jit Singh Sekhon posthumously.

iii.The Squadron has operated 2 HAL made aircraft, the Tejas and the Ajeet & operated ground-attack Mikoyan-Gurevich (MiG)-27ML aircraft from various bases across the country.

iv.The Sqn was number plated in Apr 2016 & falls under the operational control of Southern Air Command. It earned the name ‘Defenders of Kashmir Valley’ by being the first to land and operate from Srinagar. It was presented with the President’s Standard in November 2015.

IAF also flies Sukhoi Su-30MKI, MiG-21 Bison, Mirage-2000, MiG-29, MiG-27 and Jaguar. LCA Mk-2, a bigger variant aircraft with bigger engine, was under design stage and test trials of the aircraft were expected to happen by 2022.

i.This aircraft has more clearance to carry different types of weapons when compared to the earlier version of Tejas.

iii.Tejas is an indigenous fourth generation tailless compound delta-wing aircraft. It is equipped with a fly-by-wire flight control system, integrated digital avionics and multimode radar and its structure is made out of composite material. It is the lightest and smallest in its group of fourth-generation supersonic combat aircraft.

About ADA:
It is a Society under the Department of Defence Research and Development, Ministry of Defence, Government of India .