On September 20, 2019 the union home ministry announced a new honour on the Padma awards pattern named theSardar Patel National Unity Award to individuals and persons for promoting national unity and integrity. The award was first instituted by Prime Minister Shri Narendra Modi in December 2018. The name of the recipients of the award will be maintained under President’s direction and published in Gazette of India. 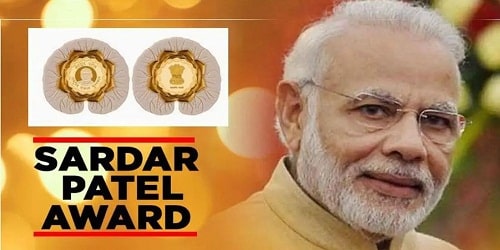 Key points
i. Eligibility: Any person irrespective of race, occupation, sex is eligible for the award. It may also be given posthumously only in highly deserving and rase case scenarios.
ii. Award features:  The decoration will be in shape of lotus leaf, with length 6cms and breadth 2cms. The decoration which will be made of fine silver and gold would be of thickness 4mm. On the other side of the medal, replica of lotus with petals will be embossed. ‘Sardar Patel National Unity Award’ will also be written in Hindi.
The decoration will be worn by men on the left breast , suspended from plain lotus tri-colour ribbon one and four centimeters in width and by women with same features fashioned in a bow.
iii. Portrait: Patel’s portrait will be embossed on a circular shaped gold metal of 2cm diameter, with the reverse side embossed with state emblem and motto in hindi. The inscription will be in gold and the emblem, lotus and petals will be in silver plated with gold.
iv. Award miniature:The miniature of the decoration that could be  worn on certain occasions will be half the size of the award. A sealed pattern of the miniature shall be deposited and kept.
v. Cancellation of award: The president has the right to cancel the award to any person, and in such case, that person’s name will be erased from the register and he/she or the institution/organisation would have to surrender the award back.

About Sardar Vallabhai Patel:
♦ He was a freedom fighter whose contribution mainly lies in the unity of the nation.
♦ He served as the first deputy prime minister of India.
♦ The govthonoured him with his statue named ‘statue of unity’ which is now the world’s tallest statue near sardarsarovar dam in Gujarat.