Union Home Minister Rajnath Singh has launched first Intelligence Wing of Sashastra Seema Bal (SSB) and Welfare & Rehabilita tion Board App(WARB) in New Delhi authorized to Protect the shared borders of India with Nepal and Bhutan. It has been confirmed as the Lead Intelligence Agency (LIA) for both the Indo-Nepal and Indo-Bhutan borders.
Nepal is sharing 1,751 km-long border with India and Bhutan is sharing 699 km-long border with India. India has visa-free regime with both Nepal and Bhutan. So the criminals and Kashmiri terrorists used this visa- free regime facility to return from Pakistan. 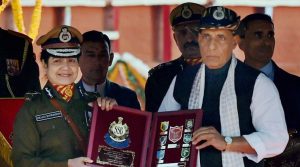 Need of Intelligence Wing of SSB  :-
i.SSB Director General Archana Ramasundaram informed that Intelligence Wing of Sashastra Seema Bal (SSB) is used to prevent criminals and smugglers from taking advantage of the friendly borders with Nepal and Bhutan.
ii.The Sashastra Seema Bal has 474 Border Out Posts (BOPs) on the Nepal border and 131 on the Bhutan border.
iii.The intelligence wing will have 650 field and staff agents to gather information about these borders frequently used by criminals and Kashmiri terrorists returning from Pakistan.
iv. Since 2010 ,230 terrorist based in Pakistan and Pakistan-occupied Kashmir have used the Indo-Nepal border returned to their home.

It also help retired personnel to have better coordination with WARB and its field formation at states, union terriroties and district level.

To avoid circulating messages on social media
Rajnath Singh said there are several anti-national and anti-social elements try to take forward wrong activities by circulating through messages on social media that are very dangerous for any society and country. He warned not to believe them unless their authenticity is verified.
Points to be noted :-
i.Uttarakhand, Uttar Pradesh, Bihar, West Bengal and Sikkim touch the border with Nepal.
ii.Sikkim, West Bengal, Assam and Arunachal Pradesh touch the border with Bhutan.