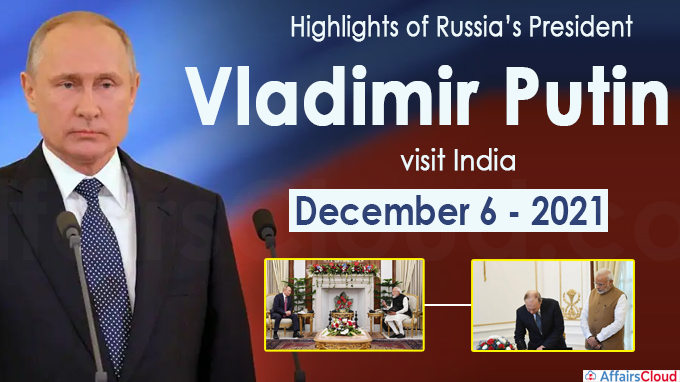 i.Putin and PM Modi held the 21st India-Russia summit, to further enhance the special and privileged strategic partnership between the two countries.

ii.Both of them discussed things related to terrorism and drug trafficking, including the situation in Afghanistan.

iv.Both countries welcomed the signing of a new Long-Term Program for Military and Technical Cooperation for the period 2021-2031.

Note – 22nd India-Russia Annual Summit to be held in Russia in the year 2022.

The first 2+2 Ministerial Dialogue between Russia and India at the level of Foreign and Defence Ministers was held at the Sushma Swaraj Bhawan, Delhi.

i.External Affairs Minister (EAM) S Jaishankar and Defence Minister Rajnath Singh had discussions with their Russian counterparts Sergey Lavrov and Sergey Shoigu at the dialogue under the framework of the India-Russia Inter-Governmental Commission on Military and Military-Technical Cooperation (IRIGC-M&MTC).

ii.The focus of the dialogue is on ‘political and defence issues of mutual interest’ and it is expected to further strengthen the strategic partnership between the two countries.

iii.Both the countries discussed key bilateral, regional and international issues, including the situation in Afghanistan post-Taliban takeover, threats emanating from terror groups, protection of human rights of minorities, women and children in Afghanistan.

iv.Bilateral Trade: The bilateral trade was increased by about 38 percent in the first half of 2021 compared to the same period in 2020. Both nations intend to achieve the trade target of USD 30 billion by 2025.

ii.In addition to the 28 MoUs, a programme of cooperation in the field of defence for the next 10 years from 2021 to 2031 was also signed.

iv.Both nations also signed an agreement for the joint production of 6,01,427 assault rifles AK-203 through Indo-Russia Rifles Pvt Ltd, in Uttar Pradesh’s Amethi (in the town of Korwa) under the military-technical cooperation arrangement for 10 years (2021-31).

India and Russia signed an agreement at the India-Russia summit to deepen collaboration in the space sector including in the human spaceflight programme, and for cooperation in the building as well as operation of launch vehicles.

iii.Geoscience – MoU between Joint Stock Company Rosgeologia (ROSGEO), a legal entity incorporated under the laws of the Russian federation and Geological Survey of India (GSI), Ministry of Mines.

iv.PROTOCOL on introduction of amendments to the Merchant Shipping Agreement between the Government of India and Russia.

v.Cultural Exchange Programme between the Ministry of Culture of India and Russia for 2021-2024.

vi.PROTOCOL between Department of State Support of the Art and Folk Creativity of the Ministry of Culture of the Russia and Indian Council for Cultural Relations under the Ministry of External Affairs for 2022-2023.

vii.PROTOCOL on allotment of land plots for allocation of Consular offices of India in the Russian Federation.

ix.Cooperation Agreement between Reserve Bank of India and the Bank of Russia in the field of responding to cyber attacks.

xi.MoU for Cooperation in the Power sector between the NTPC Ltd., Government of India Enterprise and Inter Rao- Export LLC, Russia

xv.Statement of Intent of Collaboration between IOCL and SIBUR

xix.Agreement for Academic Collaboration between University of Delhi and Skoltech University, Moscow.

xxii.MoU on manpower supplies between Magic Billion and Volshebny Milliard

xxiii.Statement of Intent of Collaboration between IOCL and Gazpromneft for VGO Hydrocracking Technology, Catalytic Iso-dewaxing.

ii.Both sides intend to strengthen cooperation within the UN Committee on the Peaceful Uses of Outer Space (UN COPUOS). They have also noted successful cooperation in the setting up of the Rooppur Nuclear Power Plant in Bangladesh.

iii.Both noted about the collaboration between the oil and gas companies of the two countries, including between JSC Rosneft Oil Company and Oil and Gas Public Sector Undertakings of India in implementing the Vankorneft, Sakhalin-1 and Taas-Yuryakh Neftegazodobycha projects in Russia, and Nayara Energy Limited’s oil refinery in India.

In September 2021, PM Narendra Modi virtually addressed the plenary session of the 6th Eastern Economic Forum (EEF) i.e. the 2021 edition of EEF, which was held in Vladivostok, Russia.