Prime Minister of India Shri Narendra Modi, paid a two-day visit to Brazil from November 13-14, 2019 to attend the 11th annual BRICS (Brazil, Russia, India, China and South Africa) summit.  The visit in detail are as follows: 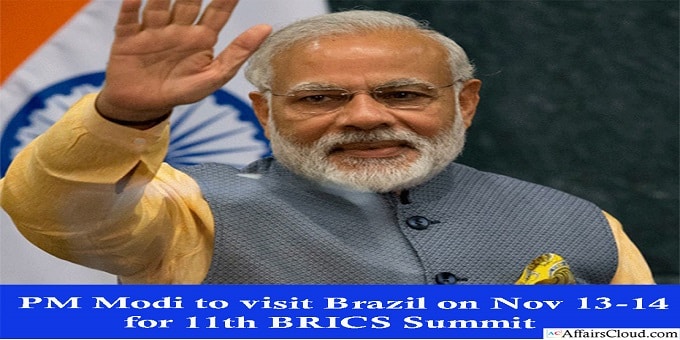 Modi attended BRICS Business Forum at Brasilia:
The Indian PM addressed the BRICS business forum on the sidelines of the BRICS Summit. Some of his key speeches were as follows,

Meet with Chinese president Xi Jinping: PM Modi and president of the People’s Republic of China Mr. Xi Jinping, held bilateral talks on the sidelines of the summit.

About BRICS:
Current chair- Brazil is the current chair of the BRICS grouping which represents over 3.6 billion people
Fact- South Africa was the last country to join BRICS in 2010.
Formation- 2006.
Headquarters- Shanghai, China.