On October 31, 2019 the union minister of Health and Family Welfare(HWF), science and technology and earth science Dr.Harsh Vardhan launched Intensified Mission Indradhanush (IMI) 2.0 portal in New Delhi ahead of the launch of IMI 2.0 programme in December 2019-March 2020. The IMI2.0 is a rechristened version of mission Indhradanush-Universal Immunization Programme(UIP) that aims to achieve 100% immunization.
The portal was launched during the celebration of the silver jubilee of the Pulse Polio Programme that was observed on October 2, 2019. 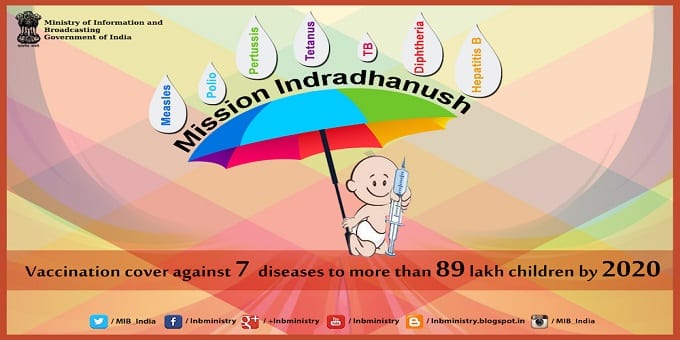 The health minister also launched 2 guidelines. They were

Key Points:
i.With the launch of UIP, Vaccine Preventable Diseases (VPDs) were increased to a count of 12 from the earlier 7.

ii.Target: The portal was designed to obtain information on target of children and pregnant women to be vaccinated during the IMI drive.

iii.Achievements: Mission Indradhanush and programmes related to it, have successfully vaccinated 3.39 crore children and 87.2lakhs pregnant women in the country.