HDFC, Airtel and State Bank of India named in the Top 50 valued brands by the The third annual BrandZ Top 50 Most Valuable Indian Brands report released by WPP and Kantar Millward Brown. The top 10 rankings as follows 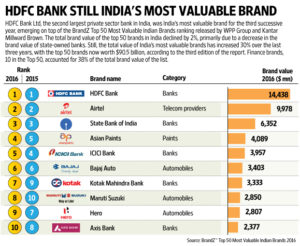 State Bank of India(SBI) is an Indian multinational, public sector banking and financial services  It is a government-owned corporation with its headquarters in Mumbai, Maharashtra.

Bharti Airtel Limited is an Indian global telecommunications services company based in New Delhi, India. It operates in 18 countries across South Asia, Africa, and the Channel Islands.